1955 THE PRESS ON THE VOCAL COMPETITION 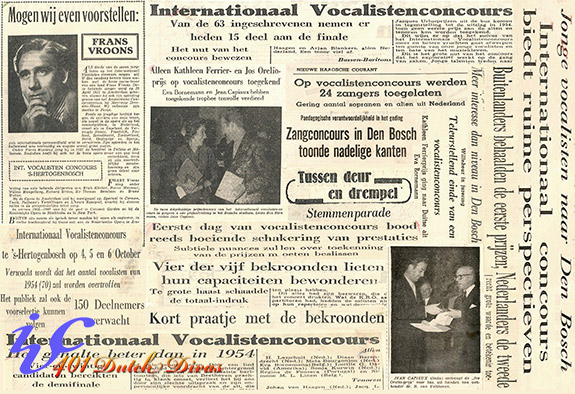 The press once again attended in large numbers and had much praise for the second edition of the former Benelux Vocal Competition. However, the critic of Vrij Nederland, then perhaps the most important review present, judged the whole undertaking to have been little more than 'a commercialization of the muse'. There can be no doubt that the City of Den Bosch and it's major had seriously invested in the Competition as a promotional venue for Den Bosch. In fact, the Competition is a main tool in the City's public international relations to date. To label it a commercialization of the muse is once again proof of the amusing opinions that critics and journalists like myself are allowed to ventilate at any given point in time – because we can, but also because we have to.

Even if such a radical position ventilated in an influential national newspaper was far from just another opinion, the fact remains that one of the most entertaining elements in such competitions was and is to compare the critics and the experts' judgments with one's own gut feeling. In this case, commercialization of the arts in general has progressed form a bad word to government policy, whereas television has paved the way for a whole different level of commercialization of the various muses including opera. At which point it should be stressed that at least the 1955 Jury gained unanimous praise for their knowledge ability and their judgment, even though De Maasbode thought that 'individual musicianship had no future in the light of the greater road to glory which was to be seen in collectivity. Even in Dutch the undersigned failed to understand what exactly was meant by that, but, as the Vrij Nederland review, it amply demonstrates that Dutch criticism was incidentally contaminated by political ideals rather than by musical judgment.

An interesting conclusion was to be found in De Tijd, which published that the importance of such a contest should not be exaggerated, since:A

'...Winning does not guarantee a great career. The IVC has not yet build a reputation, and from an artistic perspective it lacked weight, because it's only admission criteria are those of age, not talent. It is not the aim to set a challenging contest that persevered, but rather the idea of getting a break on a silver plate that ruled'.

Another critic, of an unidentified article titled 'Bij de voorslag – Vocalisten Concours', wrote the exact opposite:

'Only they who prove to have a minimum level can in the three obligatory field opera, oratorio and song, can hope to reach the second round, and the finals.'

Whereas De Tijd maintained that winning was no guarantee of sort, this author of 'Bij de Voorslag' mentioned that:

'The winners of last year's competition fared rather well. First Kathleen Ferrier Prize winner Annette de la Bije received no less than 35 engagements following her victory, both from The Netherlands and abroad. Following this, one immediately understands that the Den Bosch Competition is closely watched by the musical world. Once an esteemed jury such as this one, presided by Hein Jordans, judges one fit for the task, a singer's future seems made.'

The name of the game

As interesting as any given critic's opinion in a certain time frame may be, the world of opera, oratorio, and art song does need places where talent can be heard in conditions that approach those of the stage. Vocal competitions have flourished in the past 50 years, both in their traditional format and as popular entertainment on television. Undoubtedly, singers learn from their first experiences in public performance, be it in the competition phase, or in the final concert on stage. The element of reaping yourself a chance created this particular atmosphere of heightened expectations, feverish hope, and risk. Much as in turn tournaments candidates have to distinguish between music that brings out their natural vocal endowments to the best, and more spectacular music that is at the limit of their abilities. These ingredients have remained key attractions of the IVC from the start.

The ballotage for entry into subsequent contests would be more taxing onwards. This resulted in a shift in admissions with less Dutch participants making it in, which was already foreseen in the new, international name of the IVC: there would be significantly more foreign participants. The reason, according to the journalist of 'De Voorslag' in 1955, being:

'To get through the finals and win the first prize is a privilege for gifted, multitalented young singers. For Dutch singers this seems to be a particularly difficult challenge, because the level of vocal teaching here is not on a par with the level abroad. Events such as the competition in Den Bosch may help changing that, since the competition is clearly a stimulant for the development of a national vocal school. It creates a platform that holds far greater promises than just winning some medal or testimonial alone. To reach the finals meant to present oneself directly to conductors of choirs, orchestras and opera houses, as well as to impresarios.'

Although the unidentified journalist of the article titled 'Bij de Voorslag – Vocalisten Concours', wrote that it was difficult for Dutch vocalists to reach the finals, and even the IVC jubilee book spelled that the second edition didn't bring talents worth mentioning, we feel this is not entirely fair to Arjan Blanken, who had a considerable career in The Netherlands after winning the second IVC Competition. In the case of Eva Bornemann it would even be absurd to uphold this. She was an internationally renowned oratorio contralto, who made a significant number of solo aria recordings in addition to her appearances in complete recordings of German oratorios and religious works. Last but not least there is also Albert van Haasteren, who througout the 1960's was always mentioned among the Dutch glories of the IVC. The mere fact that his careertoo place for the largest part in Germany and out of view in The Netherlands does not make it any less fine in retrospect as is revealed in our Albert van Haasteren special. Unobserved today because they did not win Prizes were Mexican soprano Guerra Margain Amparan, and Belgian soprano Géri Bruninx and Maria Mertens, and the Portugese alto Regina Dinis de Fonsesca, who all made notable national careers, with Fonseca even appearing at the Bayreuther Festspiele. Cornelis Basoski wrote about the latter that she had unmistakable musical culture, even though she was not yet wholly mature. He also argued that Maria Mertens and the Russian soprano Tatiana Bufall (listed as Stateless in our archives, she therefore may have defected), were clearly superior to the male contesters:

'The Belgian soprano Maria Mertens made an artistic experience out of one of the most difficult concert pieces, Ravel's Shéhérezade,' while she also touched in an aria from Bach's 'magnificat.' Is is a full, rounded, and warm voice, supported by a marvellous technique and great musical culture. [...] She may not have garnered the Aaltje Noordewier Prize, although she is both by meand of her teacher in Antwerp, and her Dutch vocal coacha pupil of - and perhaps even the only pupil of - Aaltje Noordewier.' (Cornelis Basoski, 'Teleurstellend einde van Vocalistenconcours,' Nieuwe Haagse Courant, October 7, 1955)

'Tatiana Bufall gave Tchaikovsky's 'Berceuse' in a way that few renowned artsitst can match. In addition she gave a very deep felt rendition of Lisa's aria from Pique dame. She and Mertens were more to me than the male winners, and thus the second International Vocal Competition once again had a dissapointing outcome. For the future one should finally understand that there must not be separate prizes for voice categories, but rather for opera and oratorio.' (Cornelis Basoski, 'Teleurstellend einde van Vocalistenconcours,' Nieuwe Haagse Courant, October 7, 1955)