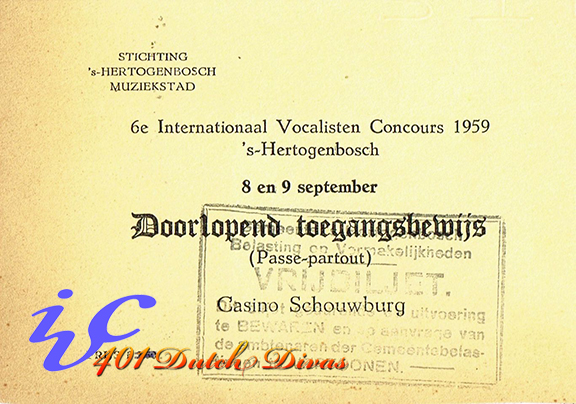 The 6th International Vocal Competition (IVC) 1959 drew a record 104 participants to Den Bosch, all ‘born after December 31, 1925, the new age limit. The 104 participants came from 17 countries, which further confirmed the new status of the IVC. This made the preliminary rounds extend to three full days, Saturday, Sunday and Monday. All participants were still required to sing two arias by composer from Mozart to modern times, in addition to which they all had to sing three songs, of which at least two had to be by German or French composers. 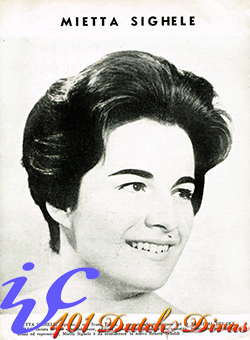 In a brief flashback it was further noted that last year’s Winner Maria Antonietta Sighele had meanwhile made her La Scala debut, while it was further pointed out that 1956 winners Elly Ameling and Ladislav Mráz had meanwhile made quite a name for themselves. Being Dutch, Ameling as of course very much in the focus of the local press, but Mráz had used the esteem of his IVC Victory to strengthen his career in Prague, while he also had started appearing internationally, most notably in The Netherlands where he had recently toured Amsterdam (Concertgebouw) and Eindhoven, with great success. Meanwhile the IVC had itself become a success story. Within the span of mere six years the competition had nestled itself among the top 4 of competitions in Europe, along with Geneva, Munich and Verviers. According to the papers this was achieved by maintaining only the highest standards from the start, which were secured in Juries of (increasingly) international standing.

The Jury included Manus Willemsen (President), Frans van Amelsvoort, Frans Vroons, Annie Woud, Roy Henderson, Gerhard Hüsch, Italian composer Virgilio Mortari, Julius Patzak, Lode Rosquin and Hélène Bouvier. Accompanists were Georges van Renesse, Gérard van Blerk, Piet Hörmann, Leo Driehuis and Elisabeth Rümke. They had to evaluate a range of vocalists that were divided in 27 candidates from Germany, 23 from The Netherlands, 13 from the UK, 9 from Belgium, 5 from Hungary, 4 each from Italy and Austria, 3 each from the USA and Switzerland, 2 each from France and Poland, 1 each from Yugoslavia, Venezuela, and South-Africa (later exploits also mention an Indonesian participant!) These were divided in 52 sopranos, 10 alt/mezzos, 23 basses/baritones, and 15 tenors.

An unidentified critic left a nice memento of his hanging around in the corridor outside the Casino Theatre auditorium, where singer came and went, either waiting there nervously for their trials, or coming back from those with even more nerves:

‘When Tuesday morning in Den Bosch the doors of the International Vocal Competition opened for the public, they faced non less than 28 semi finalists. A still respectable number that had survived the massacre in the previous days, when the rest of over a hundred singers were eliminated; more than half of them sopranos – the singer’s world is rife with these! And 13 out of the original 52 were still singing out on this Tuesday morning, along with 5 altos (including mezzos), 6 basses and baritones, and 4 tenors, a fine number, given that mother Nature hasn’t been as generous with providing tenors as she was with delivering sopranos.

28 Vocalists were worked hard from morning till evening. All had to sing a song, an opera and an oratorio aria. Accompanists came and went, while the Jury listened in silence. Manus Willemsen, president of the Jury, addressed them by microphone in 5 languages, all which he spoke fluently. The bel canto lovers in the auditorium reveled in the luxury of so many voices to sample, the best of the new harvest. An annual fun fair, for those who have the virus called bel cantissimo.’

A story behind each singer – Karin Mannhart 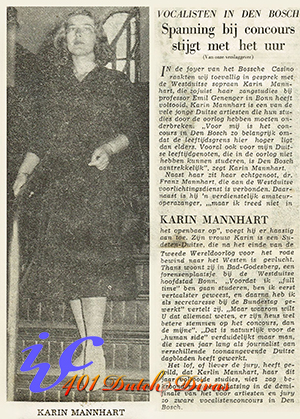 For Karin Mannhart the IVC was important for a peculiar reason, she told an unidentified critic. Having just finished her studies with Prof Emil Geneger in Bonn, she faced the challenge of having to start her career at a slightly advanced age:

‘This competition is so important because they have an exceptionally high age limit. For me and fellow Germans who could not study during the war, Den Bosch is a chance to make up for the lost time.’

She arrived accompanied from her husband, Franz Mannhart, who worked as a press officer for the German government, in addition to which he proved an amateur opera singer. Karin, a Sudeten-German from Chechoslovakia, met him in West Germany, after she fled for the Russians post the war:

‘Before I started studying voice full time, I first worked as an interpreter, then as a secretary with the Bundestag. But why would you want to know all this/ There are far better voice in this competition, I can assure you!’ Her husband, a former journalist, explained her that it served the human side of the reportages on the IVC. Perhaps regrettably after such a life story, her self knowledge proved correct, since fate, or rather the Jury, barred her from a place in the semi finals. While there may be some tolerance with respect to age, the requirements in Den Bosch are also exceptionally high.’ (‘Spanning bij Concours stijgt met het uur,’ Undentified newspaper cutting, September 8, 1959)

A chat with Zenon Kosnofski

A singer that did pass to the semi finals was Polish baritone Zenon Kosnofski, looked very tired when the reporter from the same newspaper cutting caught up with him in the foyer of the Casino. From the back of the auditoirium, Frans Vroons, Lode Rosquin, Annie Woud, Roy Henderson and Julius Patzak listened to his singing. According to the singer, he was not nervous, at least he didn’t appear to be. Perhaps it helped that he had just received an engagement for the Danzig Opera. Recalling his life and the situation for Polish singers, as well as some insights into how they reached Den Bosch, Kosnofski said:

‘I am recieivng private tutoring from prof. Victor brigby, astage director at the Warszaw Opera. In Poland anyone can study opera, given that there is some talent, otherwise you won’t find support from the government. One starts at the musical high scool, and when you made enough progress you enter the Conservatory. Admittedly, it is impossible for us to just go to some Vocal Comepetition here or there. Before we are allowed to travel to a competition as the IVC, we have to pass special tests, since the government pays for our travel and expenses. It is the Ministery of Culture that decides who can go and who can’t.’

According to Kosnofski, opera is very popular in Danzig and Warszw, which makes competiton fierce on one side, while it also leads to an upcoming golden generation of vocalists:

‘The purpose is simple, since in 1962 the new State Opera of Wrszaw will open its doors, and then we ned to be there. But please write that the hotel they provided us with is excellent!’

That the last remark regarding the accomodation was not a loose one, is shown from the advertisement that those who were residing in that same Hotel De Postzegel. It spelled:

‘The joint participants at the Vocal Comeptition who reside in Hotel De postzegel herewith thank the the stadd and the eprosnal at the hotel or the excellent treatment and care that they have given us. For all, Zofia Janukowicz-Poblocka.’ (1st prize Winner sopranos).