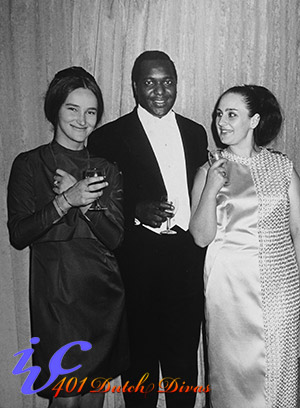 The 14TH International Vocal Competition ‘s Hertogenbosch (IVC) took pace from September 4 to 9, 1967. The event lured 92 singers to the Casino Den Bosch, 38 sopranos, 16 alto/mezzos, 25 bass/baritones, and 13 tenors from the following 24 countries, being Germany (18), Netherlands (15), UK (13), USA (12), Hungaria (5), then 3 each from Japan and Poland, 2each from Bulgaria, Canada, Finland, and France, 1 each from Argentina, Brasil, Ireland, Jamaica, Denmark, New Zeeland, Austria, Peru, Romania, Spain, Venezuela, South-Africa, and Sweden. Of these 92 singers, 72 actually arrived to Den Bosch.

The preliminaries were on September 4, 5, and 6, the semi finals on September 7 and 8. The finals were on Saturday September 9. Following the finals, the Mayor of Den Bosch would award the prizes to the winners in the City Hall. The Gala Concert of the winners would be given on September 14 in Den Bosch. A novum for the IVC was a second concert in City Theatre of Breda, on September 15. KRO would broadcast a recital given by the Great Prize winner of the 14 Th IVC, on Thursday, September 21, and feature the artist in a Telecast. VARA Radio would likewise offer the best singer a broadcast performance, in one the Matinee performances in Het Concertgebouw, the following season. The importance of the IVC was further stressed by the fact that the Awards were broadcast live from the City Hall, on Dutch TV.

Many things had been adjusted over the years, and lately the most significant adjustment had been exactly what the press had nearly ‘demanded’ for over a decade: a substantial annual change in the Jury. It couldn’t help the outcome of the event, which was the worst final result in all, with no Great Prize of the City for Best Singer awarded, only one First prize, and even that to a singer whose further career is completely untraceable today. In terms of winners, Sally Le Sage enjoyed fine career in the UK, which can still be traced. ­­Finnish soprano Heljä Angervo {LINK TO WINNERS PAGE} became a celebrity in her native country, and had comprimaio parts in a few famous opera recording, before becoming director of the Finnish National Opera for some years. The semi finals included some singers that, in retrospect, would not have disgraced the list of successful IVC winners. We mention the soon to be world famous English bass Robert Lloyd, as well as Helen Lawrence, who enjoyed a fine UK career as a dramatic soprano. Alas, any given vocal competition can come anything from a month too some years too early for a singer, as is proven by the likes of Olga Maddalena (1960/61), and Karin Ostar (1957/61). {LINK BOTH TO 1961 WINNERS PAGE} They didn’t make an impression at their first attempts, but managed to take a prestigious Second Prize home at their subsequent attempts. All in all, 1967 was simply an inferior year in terms of results, which happens with vocal competition just as it happens with wine. Nonetheless, the event culminated in a celebrated concert, for the first time not just in Den Bosch, but also in Breda, a day later.