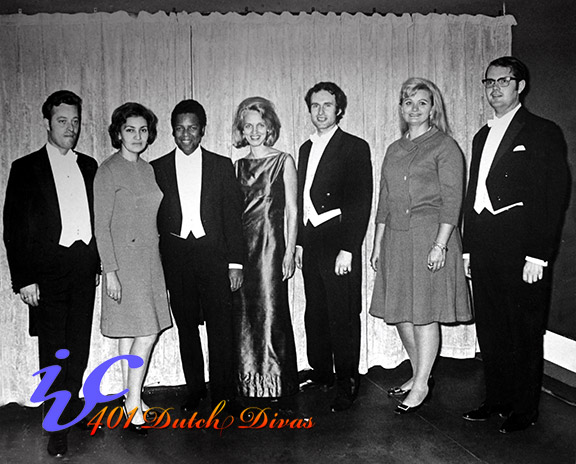 The 16TH IVC Den Bosch, held from August 30 to September 6, 1969, once again caused heated discussions among press and audience, who were dissatisfied with the Jury’s verdicts, especially with respect to the Aaltje Noordewier-Reddingius Prize, even though winner Maria Slătinaru easily achieved the most impressive career of all sopranos at this IVC. My previous argument that, since the demands of the press had been answered over the past few years, some new blood in the critics department also wouldn’t hurt, was a miscalculation though: Jan Willem Hofstra proved even less patient with beginning singers than Leo Riemens had been over the years. There was however one ray of sunshine, when Leo Hanekroot, the most fierce critic of the IVC in the 1960’s after Riemens, admitted that all his previous demands had now been met, that the organization seemed perfect, and that the Jury was up to it’s task, while the result was still impossible: ‘I ask myself if there is perhaps another, mysterious error in the organization that we have all overlooked?’ 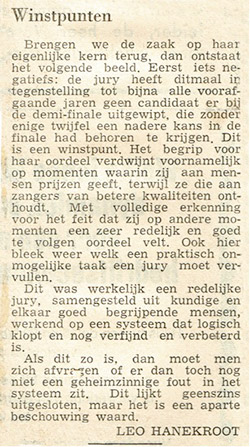 To see Hanekrooot acknowledge his defeat in so many words is surprising only in terms of the individual courage it takes to acknowledge one’s own mistakes. In a more practical sense, it is far less surprising to see him acknowledge in so many words that in terms of final results, all the changes in the organization hadn’t changed a thing with respect to the still much disputed results. Another thing that hadn’t changed was that time eventually sided with the Jury, at least in part: the truly rude with some truly rude press comments aimed at Maria Slătinaru’s Great Prize were smothered in her truly great international career. If she or the favorite of the Press and audience, alto Patricia Payne from New Zeeland, had the greater career is open for debate. Certainly, Payne’s career was not less. The Jury’s passing bye of another press’ favorite, ‘golden voiced’ Geraldine Hackett–Jones, made sense. Hackett–Jones made a fine career in the British hemisphere, but not one that could be compared with Slătinaru’s or Payne’s.

The only soprano that equaled Slătinaru’s impressive international opera career was arguably Mariana Nicolesco, while semi finalist and bass Robert Lloyd was destined to rise to the absolute top of the operatic world, in an exceptionally long career. For Nicolesco, the competition came too early in her development; she would conquer La Scala, The Metropolitan Opera and many more opera theatres as a powerful, dramatic coloratura assoluta, whereas the 16TH IVC ledgers still have her enlisting as a mezzo soprano. Robert Lloyd returned to the IVC after his premature attempt in 1967. His progress is shown in his passing on to the semi finals, but his teacher, this year’s Jury member Otokar Kraus, couldn’t yet help him beyond that point; neither did any critic yet mention him by name, meaning that he did what had to be done: go back and study harder.

Essentially, the waters between Jury, press, and audience shed over the Jury’s preference for well schooled, beautiful voices with innate musicality, versus critics and audience with a decided preference for impressive operatic voices. This pattern is clearly reflected in the applause that rained down on large voiced Dutch bass Hubert Waber, who got the lion’s share of the audience’s sympathies at the final concert. Operatic diva in the making, Slătinaru, was likewise warmly welcomed, be it in absence of public favorites, Payne, Hackett–Jones, and tenor Anthony Roden. The latter, favored by critic Hanekroot, also achieved a fine and exceptionally long career as a lyric tenor.

Since the results of the 1960’s clearly show the mentioned preference for well schooled voices above merely impressive ‘sound,’ the question as to whether this viewpoint of the Jury was right or wrong was very much on the table by 1969. A First Prize winner as Louis Williams {HYPER TO WINNERS PAGE 1967} had vanished completely from the scene after his 1967 IVC triumph. The prediction that the same would happen to 1969’s Jos Orelio Prize winner Walker Wyatt was more or less justified, given that little of his career is traceable today beyond his part in a now obscure 1970’s RCA recording of Puccini’s Le villi. The light voices of Second Prize winners Else Paaske, and Karl Markus there against flourished on the concert platforms of their native countries, in oratorio and song. Still, from today’s perspective, 1969’s runners-up John Bröcheler (Young Talent Prize), and Wolfgang Schöne (Prize of the German Embassy) would have made splendid Great Prize Winners. Both achieved great international fame as Lieder interpreters, and were there certainly on a par with Slătinaru.

That brings the argument back to Hanekroot’s near desperate acknowledgement that the final results continued to be unsatisfactory to the press and the audience. In a reader’s letter to Brabants Dagblad, A.G.M. Cooijmans therefore supported a solution that was as elegant as (financially) impossible: splitting the competition in two, one for Lieder singers, one for opera singers. Cooijmans’ argument further summarized the problem under the heated discourse: Else Paaske was ‘fully worthy of her Prize, had it been a Lieder competition, but her voice could not be compared with the Wagnerian power of Patricia Payne.’

While we have no problem admitting that the 1969 Jury obviously made an incomprehensible mistake with Payne, given that all others noted her talent at that moment in time, we are foremost happy to see that the 1969 edition brought a genuine plenitude of great names to Den Bosch. Any given vocal competition would be proud to have a year with Prize Winners such as Maria Slătinaru, John Bröcheler, and Wolfgang Schöne. In addition, IVC partner VARA Radio picked up Geraldine Hackett-Jones for their IVC Participants Concert, the January 14, 1970 broadcast of Beethoven’s Missa in C. Apart from Hacket-Jones, this concert featured Else Paaske, Anthony Roden, and Hubert Waber (who enjoyed a splendid career in The Netherlands).

This prestigious concert at the Concertgebouw Amsterdam launched the respective careers of the soloist with a kick start, and that was precisely the statutory aim of the IVC: to promote young singers and give them the last push to the various stages of the world.

Can one have too many sopranos?

In his De Tijd column ‘Kunstlicht’ (artificial light), Jan Willem Hofstra contemplated on the functionality of the IVC. He did so from the perspective of Wolf Rosenberg’s freshly published book ‘Crisis in the art of Singing,’ which led Hofstra to ponder upon the fact that only within the realm of the vocal arts people make such a near fanatical fuzz about ‘technique’:

'There is no other profession where opinions are so diametrically opposed, while opinions are at the same time presented in words that are as hermetic as mystic, since the terminology used borders on abracadabra in the eyes of laymen. This ongoing discrepancy on vocal technique is most peculiar, given that all agree that the aim is simply to produce a free carrying, clear sound that is beautiful and even throughout the registers. When reading various treatises on singing, however, methods vary as much from each other as Greek from American. It seems clear that there is no field in which charlatans are active in similar numbers. Teachers propagate the sole and eternal truth of their own methods, usually on the ‘proof’ of one or two of their pupils who made a career. This usually results in large quantities of aspiring young singers flocking that particular vocal prophet, hoping to also achieve a career of sorts.  These attempt usually fail, since to make such a career you need to have the same talents.’

Hofstra’s argument subsequently turned to the reasons why there were so many aspiring singers in 1969, while so few succeeded. In his opinion, this had less to do with Rosenbergs arguments ‘against Von Karajan or singers flying from one theatre to another,’ but rather everything with the fact that modern Western society enabled numerous young girls (sopranos always were by far the largest contingent at the IVC) to pursue a career as a singer merely because they had ‘a nice’ voice in Sunday’s school, whereas in the past you had to have exceptional qualities to be accepted into any conservatory of sorts. The rest would then be trained to a home singing level, while today large quantities of averagely talented home singers willingly let themselves be succumbed to believe that they were just a step away from a career. Such singers regarded vocal competitions as a tombola, where you ‘might get lucky.’

While Hofstra feared that many a ‘nice girl without the right coating’ would flock Den Bosch in September 1969, we believe that the IVC is particularly there to give aspiring singers an early signal about where they stand. For some this means a straight promotion into a professional career as a singer, others are confronted with the need to work harder, while many receive strong signals to reconsider their aims in life. The earlier we can get someone to realize either his limitations or his talents, the better it is. On the other hand, one doesn’t win the Olympics if only 11 people in a country play a game; there’s no harm done in learning to sing on a respectable level. While the main focus is always on the winners and the careers achieved by them, the functionality of the preliminary rounds in shifting bread from butter is an often overlooked quality of the IVC and any other given vocal competition..