The final Concert of the winners took place on September 23, 1956, at 8 PM, in the Casino Den Bosch. English tenor David Galliver, 2nd Prize Winner, had been invited but was otherwise engaged and couldn't perform. The audience proved supportive and cheered the signers on throughout, noted numerous local papers. De Tijd, by words of H. Hn., was less favorable about the performances in themselves, especially in the first part, where the orchestra was either too fast (in Ameling's 'Laudate dominum') or far too slow (in Mráz's 'Catalogue aria from Don Giovanni), while Willems had a piece that was too short to allow him to get into it. The critic thought Graham's Queen of the Night a bit dull. Things got better after the break, with Willems showing his qualities in Lortzing, Graham showing that her Verdi was better than her Mozart, while Mráz triumphed in 'Ella giamai m'amò':

'A beautiful timbre and a genuine sense for the dramatic pathos in opera.'

Ameling's third rendition of the 'Jewel aria' that she had used both for the semi finals and the finals apparently was her least inspired version, although 'still sung in a way that allowed one to enjoy the full warmth of Gounod's music'.

The four arias from the gala featured in this chapter are the same ones that were issued on the two Philips 45RPM records that were made available to the public early in 1958. See our Audio Page for more info on these vinyl releases. 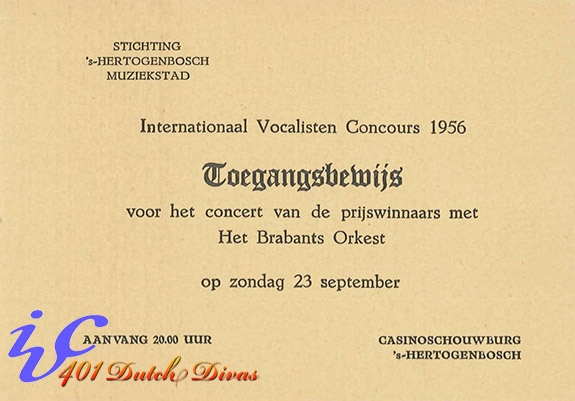