1961 THE PRESS ON THE VOCAL COMPETITION 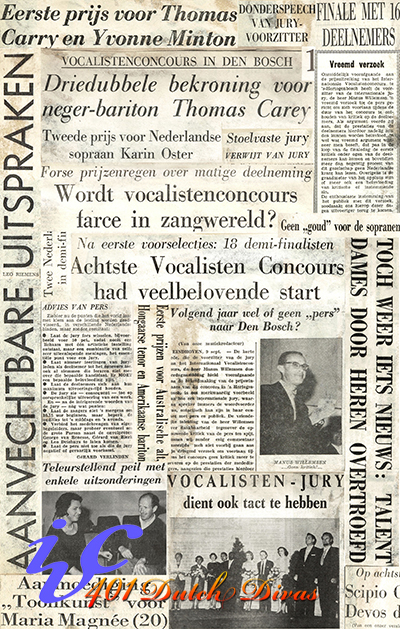 Following the successful attempt to ask the press to moderate their opinions a little bit, Manus Willemsen, President of the Jury since 1954, decided to take his quest for consideration to the next level. This time he urged the press to also stop critsizing the participant while the competition was still running, since this had a tremendous impact on their nerves, and it influenced the results of the competition.

Several newspapers subsequently published Willemsen’s request, with the added comment that it was ‘absurd.’ However, they felt compelled to respond, because the audience had given him an ovation for this speech, and the members of the press suddenly felt what it was to be criticized… Eindhoven’s Dagblad mocked that the reviews of the semi finals were only published by the time the finals had arrived, and even if their publications could therefore influence the finals, most candidates couldn’t read Dutch. That is of course not altogether true, since candidates would go looking for their names and ask people to translate it. Fact is that hitherto, a surprisingly large section of the press judged these aspirant singers as if they were recitalist in Het Concertgebouw Amsterdam. Some were hailed as future stars after having sung a mere three pieces with piano accompaniment, others were burned into the ground as complete failures that had no business in Den Bosch.

To be clear, Willemsen’s request was directly aimed against one specific critic, and not so much against reviewers as Johan van Dongen for Eindhovens Dagblad, who gave an objective, factual account of what he heard and saw. From him we learned that the average level was extremely high, with three tenors that were ready to pass on to the finals, Alphonz Bartha, Serge Maurer, and Kenneth John Bowen. Among sopranos, the great favorite during the semi finals was the Australian Ettie Holt, who demonstrated a challenging timbre in Richard Strauss’ ‘Ich schwebe,’ while demonstrating a stupendous technique in the slowly sung St. Matthew’s Passion aria ‘Aus Liebe.’ Her Verdi aria was ‘phenomenal,’ wrote Van Dongen. He was by far not the only critic who had her in mind for a First Prize, or even the great Prize of the City Den Bosch, but she was no shadow of herself during the finals, where nerves apparently got the better of her, to the point where she couldn’t even salvage an Honorary Diploma. Dutch soprano Karin Ostar also had to fight against the big impression she made during the semi finals, but managed to salvage a Second prize. Italian soprano Olga Maddalena, there against, made tremendous progress during the finals and reaped herself a prestigious Second Prize with with deeply felt arias of Boïto, and Debussy. The same could be said of English Kenneth John Bowen, who raised to new hights during the finals, especially in the brilliantly sung aria from L’elisir d’amore, ‘Una furtive lagrima.’ His effort culminated in a well-deserved Second prize. Margaret Duckworth, however, was not to Van Dongen’s taste, although another beautifully sung Donizetti aria earned her another deserved Second prize. The plenitude of prizes among bassos and baritones was expected, since all of them confirmed the impressions made during the semi finals. Henk Smit, then still presented as an ‘emigrant’ because he lived half in Canada, did so with a splendid aria from Le nozze di Figaro. The American John Wiles, excelled in Mahler and Verdi, while Hans Martin Swedberg, and Ryzzard Lisiecki, secured Honorary Diplomas. The only singer in the Jos Orelio category who remained empty handed was… Jules Bastin, in his first attempt for IVC glory! Van Dongen proved surprised, for Bastin had shown a remarkable ability to portray the discrepancy between body and soul in a spiritual Mozart aria.

Having described the order of events, I feel compelled not to leave out the discussion on the side, regarding the stipulated request by Manus Willemsen to spare al least the semi finalists, and if that wasn’t possible, to refrain from writing about those semi finals at all. If the request was odd, this was only so because, as Eindhovens Dagblad pointed out, the many publications had given wing to the competition, and without them the event might not survive. On the other hand, Willemsen wasn’t so much addressing the regular press, but he saw this drastic plea as a sort of last resort in order to stop the man who by now had emerged as a veritable enemy, indeed: Leo Riemens. The splendid harvest and the record number of participants of the previous year, Riemens opened his review of the semi finals with the following lines:

‘Who though that the IVC organization would have changed things following the catastrophic edition of last year, was deceived.’

And from there onwards, he sat high in his saddle:

‘All elements who then awarded the First prize to a soprano who went against the rules, which resulted in a verdict that isn’t valid in a juridical sense, have remained. In that light it wasn’t much a surprise to immediately stumble on a new blunder, a Polish bass who sang a soprano aria from Die Krönungsmesse,’ thus disqualifying himself, and the jury in the process, since they let it pass! […] There were only 70 participants against the 101 of last year, and of those 70 only 63 arrived to Den Bosch. To camouflage this, the jury simply allowed 29 of them to the semi finals, almost half!’

Onwards, Riemens started trashing participant after participant, in terms as:

Willemsen refered to his particularly venomous review in a ‘large national morning paper,’ and although he did not mention the critic by name, the rest of the press had no problem identifying the culprit as Leo Riemens. Faced with the roaring applause from the audience for Willemsen’s counter attack, Riemens responded as if stung by a wasp. Taking a punch proved rather more difficult, than handing them out by the dozens, although, in Riemens’ defense, we must say that for once he did pick the correct winners!

The emotional impact of a corpse…

Leo Hanekroot for De Tijd remained in the middle between encouraging words and a complete lack of understanding for the Jury’s decisions. How could they possibly have given a First Prize to an Australian alto with the emotional impact of a corpse (Yvonne Minton), whereas the First Prize should have been handed to the brilliant Australian soprano Ettie Holt… Hanekroot then condemned Willemsen in the harshest words possible, adding that it was ‘wrong to criticize the press, even more wrong to do this in public.’ His subsequent verdict on Willemsen was crystal clear, ‘ A war-monger.’ His verdict on the Jury was no less clear, since they had disqualified themselves by letting 29 singers pass on the semi finals. At the time a ‘painful’ review for the IVC organization; to date, we quote these knowledgeable criticisms with a big smile…

Letters of protest to Brabant’s Dagblad 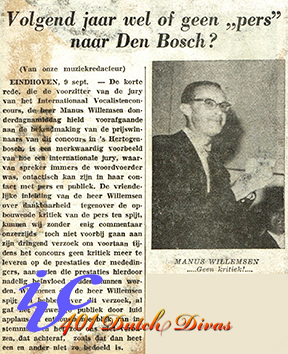 For what it’s worth, Willemsen found strong support in the audience response, not only during his speech, but also following another negative article in Brabant’s Dagblad, titled ‘Is IVC becoming a farce,’ by critic Gérard Verlinden. Among the opinions expressed in his article were such slogans as ‘First Prize in Kathleen Ferrier category for Yvonne Minton is an insult to Ferrier-voice of Margaret Duckworth, who should have been given that prize,’ According to Verlinden, Karin Ostar shouldn’t even have been let to pass even to the finals. He concluded his otherwise balanced article with no less than seven recommendations to improve the organization. The seventh recommendation spelled: ‘Don’t allow the press in if the Jury is afraid of them.’

Following this article, no less than six prominent choir directors from den Bosch co-authored an open letter to the newspaper in response, asking for due respect and a normal report of the cause of events, asking the Chief Editorial Staff if Verlinden’s tone of voice did justice to the tremendously successful 8th edition of the IVC? The editorial staff subsequently apologized for the title of it’s article, while adding that it was ‘surprised to see such enormous negative response – also from their readers – to the article, since it was the task of their knowledgeable critics to discuss such events with a critical eye.’

I readily admit that when we discovered all this discussions at fever pitch, we were surprised, even stunned… Personally, I have only one response to all the brouhaha published in these years, which is that we can only dream of such heated discussion to date!