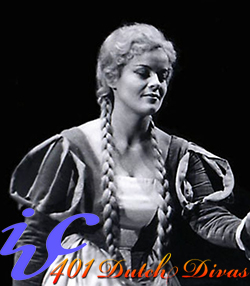 “Her performance of Agathe’s aria from Der Freischütz made an especially profound impact. She has the temperament of a born diva and will surely win a First Prize. She was beyond doubt the most striking personality on the first day of this competition.” (H. Hn., De Tijd, September 1963)

Polish lyric soprano Bożena Kinasz-Mikołajczak (b. Budzanowie) completed her studies at the Academy of Music in Warsaw in 1959. When she was unsuccessful in her first year at the Wielki Opera in Warsaw, the Bydgoszcz Opera and Operetta engaged her as Tatyana for their 1962 production ofEvgeni Onegin. Her instant success secured for her further roles with the company, such as Marguerite in Faust, Micaela in Carmen and Halka and Hrabina in operas by Moniuszko.

Her second chance with the Wielki Opera came after her First Prize in our IVC 1964, following which she emerged as the leading lyric soprano in Warszaw, while still appearing in guest performances with the old company until the mid-1980s, most notably as Halka and Butterfly. Guest performances in various European capitals (she was especially beloved in Lisbon) laid the basis for her 1974–76 engagement at the opera house in Wuppertal, where she was distinguished with the Orpheus Magazine Opera Prize in 1974. She performed at least twice in The Netherlands after her IVC appearance, once in a staged version of Moniuszko’s Halka in Tilburg with the Brabant Orchestra in 1974, and once as Aida with Opera Forum in 1977. In the 1980s she increasingly appeared on the concert stages and in guest performances around Europe, as well as again in Wuppertal.

Kinasz’s voice was preserved at its freshest in the September 1964 IVC Gala Concert, where she sang Agathe’s aria from Der Freischütz and Lisa’s aria from Evgeni Onegin, even then already one of her best roles. She recorded Marina in Boris Godunov for EMI records. In addition we have her Liù preserved in a broadcast from Wuppertal 1984 with our 50th IVC young talent coach Ernst Daniël Smid as Pong.

“During the finals Anton Thissen surpassed his semifinals interpretation of the death scene from Boris Godunov. His voice was sonorous and well equalized, and his imaginative, uncomplicated performance alluring.” (L. Sch., Bossche Courant, September 1963)

Dutch bass Ton Thissen’s love for music emerged at the age of 9, when he began singing in a boys’ choir. From 1961 to 1965 Thissen took singing lessons with Leo Ketelaars at the Maastricht Conservatory. During the same period he was engaged at Opera South in Maastricht, appearing as Zuniga in Carmen, Nourabad in Les pêcheurs de perles, and Colline in La bohème. Following his Honorary Diploma at the 11th IVC in 1964, the Aachen Theatre engaged him from 1965 to 1975. He sang many guest roles in Amsterdam and the operas in Antwerp, Ghent, Lyon and Newcastle. His 1971 debut role with the Dutch National Opera was Arkel in Pelléas et Mélisande (with IVC juror Cora Canne Meijer as Geneviève). In 1974 he added Caronte in Monteverdi’s L’Orfeo, and in 1985 he created Abt Thrithemius in Konrad Boehmer’s Dr. Faustus. With Opera Forum Thissen sang the Commendatore in Don Giovanni (with IVC Prize winner Robert Christesen), Frank in Die Fledermaus (in 1976, with IVC Prize winner Lia Rottier), a monk in Don Carlo, Zuniga in Carmen and the king in Aida (1977, with IVC Prize winner Bożena Kinasz). Other roles were Don Pasquale (Sittard, 1980, with IVC Prize winner Peter Savidge), Bartolo in Il barbiere di Siviglia (Heerlen, 1981, with IVC Prize winner Piet Nievelstein) and Rocco in Fidelio (Sittard, 1981). Thissen also gave concerts in Barcelona and Madrid. From 1974 to 1990 he taught voice at Maastricht Conservatory. In 2004 Thissen founded the ensemble Capella Druzhba, with which he sings to this day. Among his preserved broadcast recordings are a concert featuring Osmin’s aria and Brahms’s Liebeslieder; Hunding in Die Walküre from Ghent, 1971 (with IVC 1957 Prize winner Maria Verhaert); and Guccio in Gianni Schicchi from Cologne, 1975 (with Dietrich Fischer-Dieskau). 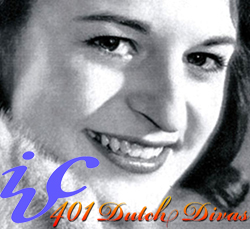