1972 THE PRESS ON THE VOCAL COMPETITION

The first name that stepped out of the shades of the preliminary rounds in the 1972 IVC Den Bosch was negro tenor Moises Parker, whose ‘Che gelida manina’ enraptured the audience during the first day of the semi finals. As for Dutch candidates, only mezzo soprano Jacqueline Jacobs and soprano Germaine Stordiau made it to the semi finals; Jacobs eventually won the Young Talent prize ‘Toonkunst.’ Regrettably, we have no recordings of her voice, whereas Germaine Stordiau would later record a privately released vinyl album with Bach’s ‘Weichet nur, betrübte Schatten’ fromCantata BWV 202, Mozart’s ‘L’amero sarò costante’ from Il re pastore, and ‘No word from Tom… My father!,’ from Stravinsky’s The rake’s progress. Along with 3 songs by Gordon Jacobs, this record gives a fine sample of Stordiau’s voice (LP Havox 6812.045). 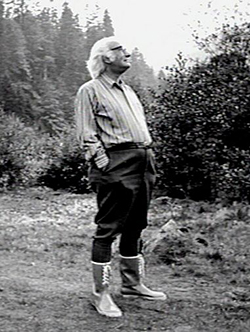 For the very last time, Leo Hanekroot dominates our Press section, since he either passed away prior to the next competition or health issues prevented him from attending further competitions (the exact year and date of his passing away is unknown to us, but we couldn’t find any post 1972 publications by his hand). Whereas I doubt if anyone within the IVC or the audience missed Leo Riemens’ contributions, those of Hanekroot were on a different level. For all their venom, they also had substance and revealed many interesting details regarding the course of the competition. Never having any doubts about the absolute truth of his own observations, Hanekroot’s 1972 IVC reviews show him in great ‘renegade’ form. He juggled out titles such as ‘Slapstick Jury leaves audience bewildered,’ ‘Dumbfound and hilarious atmosphere at the end of the Vocal Competition,’ and ‘Jury fell for show of ‘vocalizers’.’ When Romanian soprano Gerda Spireanu was hailed as First Prize winner ‘on the grounds of her beautiful voice and her great technical skills,’ Hanekroot commented that:

‘This poor voice was indeed the best trained voice I ever heard cracking out high notes, which she juggled at random in exceptionally long selections of Bellini and Donizetti. In their comments, the Jury mentioned that she still lacked ‘artistry,’ but then why on Earth would they give her a First Prize? No, talking about beautiful voices I was foremost curious about what the Jury had to say about Second Prizewinner Nina Stefanova, who had a truly gorgeous voice. The Jury dubbed it ‘flexible.’ Well, it was that flexible because she was such a great artist, both in terms of technique and artistry. Nina Stefanova is not just a vocalist, she is what I like to call with a word of my own invention, a ‘singster.’’

Grudgingly, Hanekroot still agreed that Stefanova had wasted her chances by appearing overtly nervous, insecure and shy. ‘To own the stage is another quality that belongs to singing,’ wrote Hanekroot. The real Great Prize winner of the City Den Bosch, alto Patricia Payne, Hanekroot wrote that she was a drama queen in the negative sense of the word, even though she had impressed him during the semi final:

‘A First Prize would have been a bonus, but the Great Prize, complete madness, even if this Prize is no longer officially accompanied by the title ‘Best Singer of the Competition,’ which the winner will of course always be in the eyes of the audience.’

Another First Prize winner, the American baritone Robert Currier Christesen was judged ‘capable,’ although his singing revealed a lot of ‘dilettantisms,’ except in a futile musical trifle of Charles Ives, where his accompanist screamed along to either get the baritone through, or cheer him on:

‘And guess what… the audience went wild! Apparently the magical thing was that it all happened without even raising his right arm in crescendo… Which idiot in that Casino concluded that the absence of a non-quality was a quality. I have no idea what the Jury was referring to when they praised his ‘artistic maturity.’ In the very next moment, they praised Second Prize winner Jacques Bona on four objective grounds that anyone with a brain could understand, thus praising their Second Prize winners much higher than their First Prize winner. Fortunately, the audience immediately responded to this madness and booed the Jury’s verdict on Bona. […] The final joke concerned Adelheid Krauss’ Second Prize among altos.’

We still feel that we can’t quote all the bashful and shameless personal attacks on then overtly young and defenseless singers, so we will spare Miss. Krauss the utterly insulting and uncalled for lines that Hanekroot devoted to her. On the other hand we have no problem to quote Hanekroot’s opinion on the Jury, which he disqualified as ‘patronizing,’ in addition to which they had ‘made a joke out of themselves in 16 out of the 19 competitions that were held till so far.’

Given these outrageous qualifications, Riemens and Hanekroot had gradually turned into the Laurel & Hardy of IVC critics, and yet… at the same time Hanekroot kept the IVC organization wide awake in times where it would otherwise have been easy to rest on the remarkable success of the competition. Hanekroot’s influence on the changes in policy of the IVC in the 1960’s was unmistakable. Many of his bluntly posted ‘recommendations’ were new IVC policy the very year after he had made them.

The more serious and well-respected NRC icon Chris de Jong-Stolle duly noted that most 1972 IVC candidates were rather old on average. In addition, he also noted that among 144 performed selections, only two compositions were by modern Dutch composers, while modern composers of other countries were also nearly absent. The rule required one to also sing songs by composers who had died post 1910, and De Jong-Stolle though that it was about time to significantly draw the line regarding ‘what was a modern composer’ much closer to the present.

The vengeance of a golden tenor 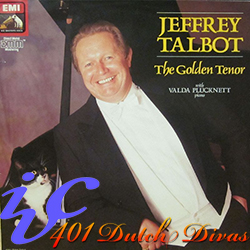 Whereas we usually hear all about the opinions of the Press, we rarely hear a response from the singers, unless they win a prize of course. Even obtaining interviews on IVC participation from decades ago proved difficult when the singers asked had not been among the prize winners. All the more interesting to hear English tenor Jeffrey Talbot complaining to the audience outside that no tenor had been given a prize. As we say in Den Bosch, there is no better lesson learned from not winning a prize, than to fiercely disagree with the Jury and then to prove it in life. We congratulate Jeffrey Talbot with his fine career and present here proof of his artistry by a sample of his fascinating EMI vinyl recording. While this recording demonstrates that he learned his lesson well, the ambitious title ‘The Golden Tenor’ betrays that in spirit he remained the same, self-confident singer that graced the 1972 issue of our competition!

We started this essay on the 19th IVC with Cuban (the IVC records list him as English) tenor Moisés Parker, who stepped out of the shades of the preliminary rounds with a radiant ‘Che gelida manina.’ Although Press and Jury ruled that the tenor section at the 19th IVC was ‘particularly poor,’ Parker did make it to the finals and he ultimately achieved a fine career. Arguably, his career culminated in the legendary 2004 performance of Florestan in Fidelio on Robben Island, the place where Nelson Mandela had been kept prisoner of the Apartheit regime for decades.

The video reveals a lirico spinto tenor in fine voice, and one can imagine the enthusiasm of the 1972 IVC audience for the young Parker. In addition, he recorded an exceedingly rare 1970’s vinyl album with Cuban spirituals, titled ‘!Oh dulce aurora!’ Another ultra rare German CD titled ‘Konzert’ brings an interesting selection of his Lieder, religious and gospel repertoire, in addition to which there is a download available with his appearance at the 1997 Mezinárodní Hudební Festival, where he sang 13 famous tenor arias ranging from Cavalleria rusticana to Turandot. These recordings show his voice and it’s burnished, galvanized timbre wholly intact after 25 to 30 years of a career that was concentrated in the German provinces.