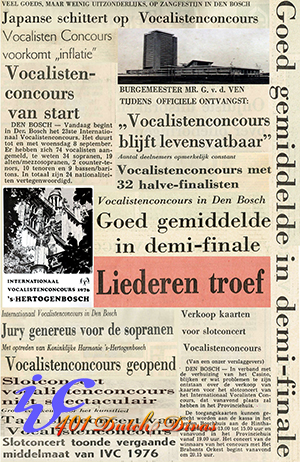 When the preliminary rounds were completed, 12 sopranos, 5 tenors, both countertenors, 7 altos/mezzos, and 4 basses/baritones had ‘survived.’ Hein Zomerdijk noted for Brabants Dagblad that there with Dutch soprano finalist Wendela Bronsgeest, mezzo-soprano Ibolya Sárvári-Bronkhorst, bass John Janssen and baritone Jan Jaap de Leeuw, there was a notable rise in the number of Dutch participants competing for the prizes.

Fascinating to read is that the semi finals stated at the unusual hour of 11 AM, which was ‘due to direct broadcasts as well as recordings that were to be broadcast at a later date.’ By now almost needless to say, we have of course secured a number of those recordings in our archives, which will be presented where these are appropriate.

Hein Zomerdijk agreed with the choice of 4 of the 7 finalists among sopranos, starting with the East-German Brigitte Eisenfeld, the English songbird Julie Kennard (‘Her preference for song was underscored with a very delicate production of sound,’ Hein Zomerdijk, Brabants Dagblad), the Japanese Mitsuko Shirai and then also Dinah Harris. The latter had made a fine impression in the 1975 edition of the IVC, until she lost her breath at the end of the extremely hazardous Zerbinetta aria ‘Grossmächtige Prinzessin’ from Richard Strauss’ Ariadne auf Naxos. Zomerdijk:

‘It appears that she meanwhile learned how to sell her talents best. Apart from that she had the sympathy of the audience, that remembered her even before she had sung a single note. Perhaps such gestures do not really achieve miracles, but a little encouragement after the first number does give a boost to one’s self esteem. In any case, Harris once again made the finals, deservedly, since she made the most of her selections, although she still had her hands full with Verdi’s ‘Lo spazzacamin.’ (Hein Zomerdijk, ‘Jury genereus,’ Brabants Dagblad, September 4, 1976)

Zomerdijk further believed it stimulating for Wendela Bronsgeest and Ann Marie Durant, that they were also given a shot at the finals. Zomerdijk further thought the election of American soprano Ann Meza ‘a bonus;’ she had a fine voice but of her Debussy song not a word could be understood.

Among tenors West German Frieder Lang, winner of the 1975 Prize ‘Dutch Musical Interests’ once again made it to the finals. When the Brazilian tenor Aldo Baldin was also let to pass to the finals, Zomerdijk had wished the same for the impeccably dressed Japanese tenor Hitoshi Hatano. Among basses and baritones, Zomerdijk found much talent but only one exceptional voice, which belonged to young Dutch bass John Janssen. Still, the Austrian Norbert Prasser had much going for him as well. Chech bass Miloslav Podkalsy had a large and impressive voice, but in terms of interpretation he tried to maintain an air of importance that made his look very static – the opposite of what one needs for opera. Regardless, Podkalsky passed to the finals, whereas Prasser did not (he was later compensated by winning one of the BUMA Foundation Prizes). Also let to pass to the finals was the East German Hartmut Kriszun, whose diction was considered a bit immature and the Australian Michael Lewis, who was not wholly in control of his vibrato, but compensated with a straightforward musicality. Both American countertenors were let to pass to the finals as well; of them Minter impressed most:

‘He sang a little know aria from some Bach Cantata so plainly right-out touching, that he couldn’t possibly have messed up things onwards; there was no way the finals could have slipped from his grip.’ ( Hein Zomerdijk, ‘Goed gemiddelde,’ Brabants Dagblad, September 6, 1978)

Among mezzos, Zomerdijk largely followed the Jury as well, starting with the Japanese-American mezzo Kale Lani Okazaki, and the Romanian mezzo Mihaela Agachi. The Dutch mezzo Ibolya Sárvári-Bronkhorst compensated with enthusiasm and dramatic allure for some technical shortcomings, which were also forgivable since she had selected an extremely difficult piece from Rossini’s La Cenerentola. That the Australians Wendy Verco and the Japanese Yumi Tojima would be outsiders in the finals was confirmed in the ultimate results. 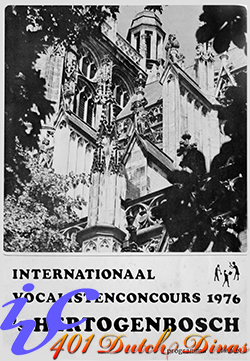 Zomerdijk noted that the finals provided unusually diverse entertainment, since a large number of finalists had Lieder as preference rather than opera o oratorio. It was once again a long day, with nineteen finalists, each due to sing three numbers, one selected for them by the Jury. This did not lessen public enthusiasm since the large hall of the House of province appeared next to sold out. The audience proved very concentrated, and looked for each sigh, each imperfection of little thing that could give a clue as to the final outcome of the day:

‘The competition was even interrupted for a moment, just after Mendelssohn’s ‘Gott sei mir gnädig’ from Paulus , a fitting text for a bass with aspirations. The reason for the interruption was to be seen in the vocal invasion of Dutch Radio III into the ‘Heil’ge Hallen’ of the House of Province. From the Jury’s balcony above, President Manus Willemsen called for secretary ‘majordomo’ Eugène Pannebakker, to put a stop to the acoustic pollution so that the spirits of Mount Olympus could continue to judge and enjoy the delights of art. Well, Mount Olympus… perhaps one should rather speak of Mount Fujiyama, since the greatest triumph was reserved for the smallest contester, the teeny-tiny Japanese soprano Mitsuko Shirai.’ (Hein Zomerdijk, Japanse schittert,’ Brabants Dagblad, September 6, 1976)

Whereas Zomerdijk thought Shirai the sure winner at great distance, Jules Cuypers, writing for De Telegraaf, though sopranos Dinah Harris and Brigitte Eisenfeld not far behind the Japanese. Cuypers thought it disappointing that Eisenfeld had not also been given a second prize along with Dinah Harris, since a mere honorary diploma seemed a bit below her standing. What effectively happened was that Eisenfeld had impressed with her coloratura fireworks during the semi finals, and she excelled again in Lakmé’s ‘Bell song’ during the finals. Unfortunately, she had also placed Bach’s ‘Coffee cantata’ on her list of available repertoire and when the Jury asked her for that piece, she proved to have only a rudimentary knowledge of it. Zomerdijk:

‘This resulted in a musical striptease, leaving her with very little in musical terms. After that, her beautiful ‘Bell song,’ matched by a very agreeable appearance and an advanced although not yet perfect technique, could no longer save the day for her and she ell short of the prizes. She did secure an honorary diploma, but having ranked among the favorites, this was obviously a disappointing outcome for her. She was living proof of how difficult it is to judge talent at a single moment in time, and also of how easily one can make mistakes about any given talent, not to mention the fact that talent an also all short of itself.’ (Hein Zomerdijk, Japanse schittert,’ Brabants Dagblad, September 6, 1976)

‘Clearly, the International Vocal Competition organization has completely turned the rudder from coloratura divas to Lieder singers (even if they have less vocal stamina). This is show by the fact that East German coloratura soprano Brigitte Eisenfeld received but an Honorary Diploma for her trapeze work in Lakmé.’ (Charles Fabius, ‘Vocalistenconcours voorkomt Inflatie,’ De Volkskrant, September 9, 1976)

Otherwise, only Second Prizes were awarded in the altos/mezzo, tenors, and basses/baritones categories. The lucky ones here were Romanian mezzo soprano Mihaela Agachi, US countertenor Drew Minter, German tenor Frieder Lang. Most secondary prizes were divided between Dutch mezzo-soprano Ibolya Sárvári-Bronkhorst, Dutch soprano Wendela Bronsgeest and the young Dutch bass John Janssen, which critic Charles Fabius welcomed as very good development. To begin with, he thought that these ‘encouragement’ prizes wee the most interesting ones, but he also thought that the Dutch candidates had done a great job during the 23d IVC:

‘Since Dutch vocal talent is not found daily, a few new names of promise are more than welcome. Bass-baritone John Janssen, specialized in Lieder, is the great discovery of this competition to me. Similarly, I fail to understand how he could even consider competing here at this early stage in his development and education. He has to work on his technique, but if he continuous to study in the right way, without succumbing to accepting too many engagements too early, he will one day put the entire competition here in his back pocket.’ (Charles Fabius, ‘Vocalistenconcours voorkomt Inflatie,’ De Volkskrant, September 9, 1976)

The final verdict on the 23d IVC was that it had a high average level, without truly outstanding performances, and this feeling was largely confirmed by both the Final Concert and the future careers of most winners. The most significant exceptions were Great Prize winner Mitsuko Shirai, who launched an exceptional concert career in Europe (she also sang frequently for Dutch Radio in the years following her IVC victory) and Japan, and the groundbreaking countertenor Drew Minter, who achieved true world fame. That bass-baritone John Janssen is completely forgotten in the Netherlands is not for lack of success, but due to the fact that he soon moved to Germany, where he achieved an outstanding operatic career that started at the Bavarian State Opera in Munich, which reflects precisely what Hein Zomerdijk predicted for him: one day he would put all competition in his back pocket. Dinah Harris, Mihaela Agachi, Frieder Lang, Norbert Prasser and Wendela Bronsgeest all had fine, largely national careers.