1954 THE PRESS ON THE FIRST COMPETITION 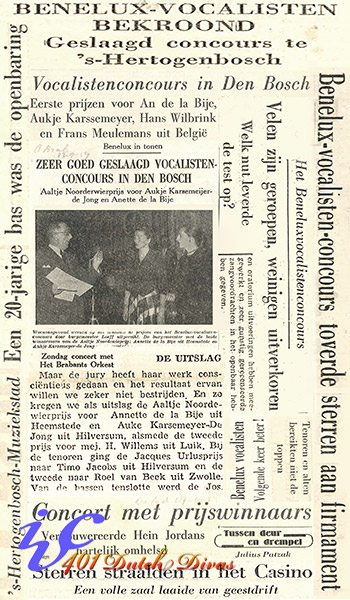 ‘In music journalism it is good practice not to ponder over decisions made by Juries, even though a critic might have decided very differently. Regardless, given that the Benelux Competition plans to continue in the next years, my advice above might serve them.’ (Wouter Paap, ‘Benelux Vocalisten volgende keer beter!,’ ­De Nieuwe Eeuw, October 2, 1954)

With these cleverly formulated words, Dutch classical music authority Wouter Paap set the tone for decades of precisely that what he said music critics never did: challenging the verdicts of nearly all Juries of the Benelux/International Vocal Comeptition (IVC) Den Bosch, for decades to come. In these pages we will see reviews and opinions vary from individual critics who are convinced thatthey alone hold the truth within them, up to those who readily admitted that the fun part in any given vocal competition was prcisely to challenge the Jury, even if just for the sake of it!

Even though the First Benelux Vocal Competition was hardly promoted, which left plenty of seats vacant during the finals, the Press attended the First Benelux Vocal Competition in large numbers, but was divided in its evaluation. Most noted some shortcomings that naturally follow from such an event being organized for the first time. Regardless, they were generally very encouraging and definitely interested. The Dutch magazine Mens & Melodie wrote of the September 22, 1954 finals with 27 competitors, in the Casino Den Bosch:

'All finalist were given ample space and time to secure optimal performance conditions. There was no rush, no pressure. They were adequately accompanied on the piano by either George van Renesse or Gérard van Blerck [and Piet Hörmann – RS]. The atmosphere was more collegial and relaxed than would expect among competitors. Perhaps the fact that public attendance was very low helped in loosening things a bit; there was a family like atmosphere among those present. Here and there one understood from comments made from those attending that there were some learned teachers among the audience, but in general it felt like a missed chance to see so few represent ants of the musical world there. The competition could have been a perfect recruiting place.'

Mens & Melodie noted some shortcomings in the criteria for valuating the competing young singers, since the division in vocal ranges was not paired with a comparison within specific fields, whereas the obligatory genres of opera, oratorio and song were considered rather much to ask of a young singer. Therefore, Wouter Paap, thought it would have been better to award prizes for genre rather than vocal range.

Most members of the press had the highest expectations for baritone Hans Wilbrink. The others were generally considered nice young singers about whom not much could be said except that their final concert performances were somewhat nerve wrecked. Annette de la Bije's Mozart aria was considered by some to be a shade too difficult for her, which was also thought of Frans Meulemans' rendering of Bach's 'Der zufriedengestellte Aeolus', a difficult coloratura aria. Frans Meulemans proved rushed and nervous in 'Largo al factotum' from Rossini's Il barbiere di Siviglia, and Aukje Karsemeyer-de Jong failed to make much of Agathe's Freischütz aria. However, most singers proved stronger in their second aria (and some critics found no fault in their fist arias either).

One of the wonderful things of such competitions is to make one's own list of favorites, and then later – years later – to check who was 'right'. Wouter Paap reviewed the competition as a whole under a caption that spelled 'perhaps next time they will fare better', but the audience proved more intelligible. It applauded most enthusiastic for Annette de la Bije's singing of Puccini's 'Un bel dì vedremo', and she became a genuine star soprano at the Dutch National Opera Ensemble for the next decades, in the major lyric soprano parts. A full portrait of her online can be found here. Likewise, Hans Wilbrink, a favorite of the critics enjoyed an equally impressive career which landed him a job as ensemble member at the Munich Opera, where he sang from the 1970's until the beginning of the 21st Century! A summary of his achievements can be found here. A full portrait and discography can be found at 401DutchDivas.nl here

Among the finalist, two distinguished themselves at least in the eyes of one critic, tenor Chris van Werkom and soprano Hanneke van Bork:

'Among the males there was [Chris] Van Woerkom from Oegstgeest, who made the most of his gracious, flexible and well placed tenor.' (IVC 1954 in Oost Brabant, September 23, 1954)

'The soprano Han(neke) van Bork made us listen to a piece by Mozart that was so precise of texture and touch that it will remain in or ears for a long time.’ (‘Zeer goed geslaagd vocalistenconcours in Den Bosch,’ Oost Brabant, September 23, 1954)

Among tenors only the second prize was awarded (one paper mentioned two Second Prizes being awarded here), whereas the altos failed to pass the Prize criteria, much to the dismay of some critics, who thought the altos at least superior to the tenors. Their recommendation with respect to the planned organization of further competitions (then thought to be held bi-annually), was 'to thoroughly revise the artistic evaluation process'. This valid point was taken to heart by the organizing committee, even though, in hindsight, they can be rather proud at the results. With De la Bije and Wilbrink both having landed a major careers, the 1954 competition still ranks among the most successful IVC competitions in the 60 years of it's existence.