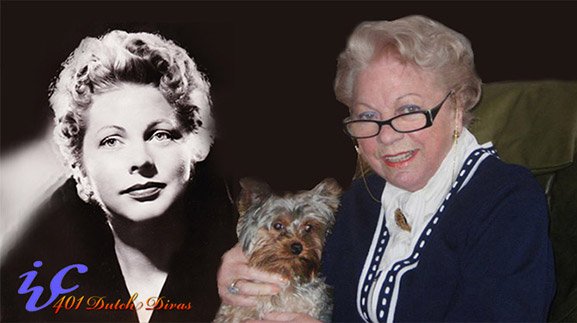 Being a performing couple, Annette de la Beije and her husband since 1951, Jan de Man, frequently discussed future possibilities. Scraping Lieder concerts together was not easy, recalls De la Bije, and securing auditions before unwilling conductors was even more difficult. Therefore, somewhere in 1954, her husband suggested that she participated in the International Vocal Competition in Den Bosch (then called Benelux Competition), that was due in September 1954. De la Bije agreed, and when the day arrived to travel to Den Bosch, she went there well prepared,a lthough she had no idea what to await in terms of competition. De la Bije:

‘You arrived there with a lot of singers. You had to sing song, opera and oratorio. If you made it through to the next round, you were already on the verge of the finals. That was of course the main round. The jury chose what to sing from a list of repertoire submitted by yourself’.

De la Beije had not expected her victory (which she shared with Aukje Karsemeyer-De Jong among sopranos, and Hans Wilbrink and Frans Meulemans in the bass/baritone category). She had previously only locally participated in a singing contest in Scheveningen, at age 18. The Benelux Competition was her first serious attempt to force a breakthrough. At that moment she had no clue where she stood as an artist, since her ‘career’ at the time consisted primarily of occasional church and Sunday concerts in and around The Hague, and even those performances were then hard-fought. De la Bije:

‘I was dubbed an ‘undiscovered talent’. That is no longer possible today, but at the time winning the IVC from scratch had a huge impact. Before I won, I had to beg for one or another conductor to be able to audition, and now, suddenly they came to you! The very evening when it was announced that I had won, choir director Lodewijk de Vocht awaited me in front of my dressing room, inviting me to sing Brahms’ Deutsches Requiem with him in Brussels. I jumped on the offer and then he mentioned my fee, a huge sum in my eyes! I gasped: ‘So much?!’, which made my impressario, a certain Mrs. Scheel, take me aside. She lectured me on good backstage manners, with rule Nr. 1 being to never show any emotion at the hight of any given fee. I should merely nod and pretend it was normal. Well, that lesson was not wasted on me!’

As a member of the audience, Dutch soprano Lenie Moonen attended all 50 IVC competitions since 1954. Having been born in 1921, she might actually have participated in the competition, but she had a full time job at the time and never considered making a career, even though she studied in private with such famous fellow students as Elisabeth Cooymans. In the filmed interview provided here, Miss. Moonen recalls the first Benelux Vocal Competition, and reflects on the 49 years that have passed since (Dutch only). Her death in 2014 prevented her from completing the full circle of attending all 50 years from the first competition, but fortunately we have been able to preserve her memories here.

As a member of the Jury, the world famous Austrian tenor Julius Patzak left his reminiscences to the journalist of an unidentified Brabant newspaper clipping. The journalist noticed Patzak's 'delightful personality', and introduced him as a friendly chap, in good spirits and uncomplicated.

It wasn't the tenor's first visit to Den Bosch, since he had good memories of a 1950 performance in Franz Schmidt's Das Buch mit den sieben Siegeln there, conducted by Rob Gevers. The existing contacts may have helped to secure his participation in the Benelux Vocal Competition, in addition to which Patzak was a particular favorite of the Dutch public. With Mengelberg conducting, he sang in Mahler's 'Lieder eines fahrenden Gesellen', in Bach's St.–Matthew's Passion and Haydn's the Seasons. In addition Patzak had occasionally appeared on Dutch Radio broadcasts. At the time of writing, he was about to make his English language debut in London in The tales of Hofmann by Offenbach. In Vienna he was looking to a particularly busy season ahead, as the Viennese Opera house was about to reopen and he was expected to sing there his celebrated Florestan in Beethoven's Fidelio, the great Mozart tenor parts, as well as Schmidt's Das Buch mit den sieben Siegeln.

To the credit of the first organizers of the Benelux Vocal Competition, it should be mentioned that they had managed to secure a Jury that had the necessary weight to be taken serious among musicians, as well as among the press. This has remained a keystone to the organization ever since. When it was over, Patzak gave a balanced evaluation of the first competition, which had given him a few new insights on singing, said the tenor:

'Among the young soloist there are very promising voices. However, I was surprised to see them appear in such unsuited repertoire, among which were arias that many an experienced singer would not approach without some hesitation, and when, then only with the utmost care. I can understand their youthful enthusiasm, but technical difficulties in singing one should not solve by without knowing what one is doing with his throat.'

'The beautiful, more simple art song did not come by often in the contest, to my regret. This is due to a lack of experience and knowledge. Young singer's look too much to their older colleagues, and then also rather to the most successful ones. They want to be like them and just copy their repertoire, which can be a hazardous undertaking.

Singing is a difficult profession, which includes many risks. Only with profound knowledge, gained in years of study and routine, can one hope to bypass the difficulties and master the art. The bragging enthusiasm of youth was often the case for a premature ending of many a promising voice.'

Patzak had a final word of consolidation though, since he readily admitted that he and all those famous colleagues had all made exactly the same youthful mistakes once, and they still had made it to there they were now. Thus the tenor left Den Bosch, on his way to the challenges awaiting him in Vienna in a season that still ranks among the highlights of his career.