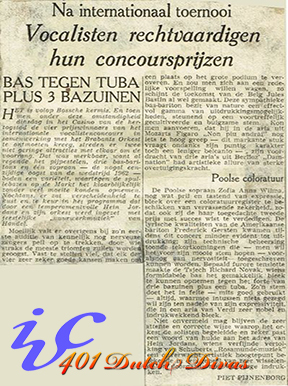 The final gala concert of the winners of the Ninth IVC had severe competition from the brass band at the Den Bosch Kermes, judging from the disappointing number of peoples that attended the concert. Admittedly, a concert with three bass-baritones and one soprano was a somewhat unorthodox program, when compared to the previous editions. However, as has been argued before, those who stayed at the Kermes missed a not insignificant part of the future of opera in terms of bass voices, where it concerned Richard Novák and Jules Bastin. Piet Pijnenborg wrote in an unidentified local newspaper that although it was hard to predict any given winner’s future, he expected a sound career for Bastin:

‘This sympathetic bass-baritone has an effective scale of expressive means, and he can rely on a marvelously cultivate, flexible voice. Perhaps ‘Non piu andrai’ from Le nozze di Figaro was still above his power, but his rendering of three arias from Berlioz’s Le damnation de Faust had artistic allure and wholly convinced.’

Since Second Prize winners among altos Julijana Anastasijević had obligations elsewhere, Polish soprano Zofia Anna Wilma was the only female singer at the concert. She proved to be still searching for a genuine expression, but she showed a coloratura register of surprising accuracy, and defended her second prize with success. The lyrical qualities of the American bass-baritone Frederick Gersten did not stand out during his concert appearance, which I attribute to nerves – regrettably, for he does have a beautiful timbre.’

‘Sensational, a formidable bass who had no problem dealing with the fortissimos of the three trumpets and a tuba that hurled from the kermes outside.  A voice like that can hardly fail, if used well, which s not to say that there was anything lacking in terms of expressivity in Verdi.’

Compliments also for Hein Jordans and the Brabant Orchestra for their rendition of the ballet music of Schubert’s Rosamunde, which, according to Pijnenborg, proved a highlight in the evening.

* These performances were not preserved on our original reel-to-reel tape. It is unclear if they were broadcast or not. The concert may have been cut to fit a one hour program, which, with introductions and commercials, would exactly be the size of this program which runs a full 53 minutes.