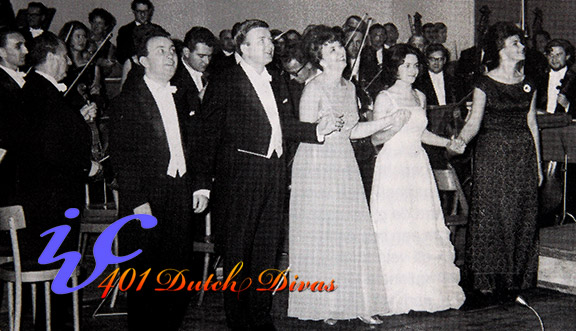 ‘The concluding Gala Concert of the IVC 1965 brought many spectators to the local Casino. They were treated to sheer overpowering voices.’ (L. Sch., Bossche Courant, September 16, 1965)

‘The best that was reaped from the arena of the latest IVC Den Bosch appeared in yesterday’s concert in the Casino, accompanied by the Brabant Orchestra under the fine baton of Hein Jordans. What Jordans had achieved with so little preparation time deserves our admiration.’ (Piet Pijnenborg, unidentified Newspaper Clipping, September 16, 1965)

Overwhelmed by the splendor of the evening, the reporter of Bossche Courant couldn’t help but leave all objectivity behind him. He loved the opera arias selected by the singers, who had chosen them cleverly as vehicles to show off their voices to maximum effect.

Neither had they spared themselves on the evening of September 15, since they aimed to impress not only with the splendor of their timbres, but also by their technical mastership. The correspondent almost complained that there was so little for him to critisize except the normal lack of stylistic maturity and dramatic gesture in any given young singer. Sigmunds Nimsgern’s aria from ‘Le nozze di Figaro’ came out a bit bombastic, but it also revealed his completely reliable bass voice, which kept its splendor even in the lowest tessitura. Faith Pulleston Jones exceeded her achievements of the preliminary rounds, and suddenly revealed a mezzo soprano voice to be jealous off. Ileana Cotrubaș showed wonderful command in the aria from Linda di Chamounix, although her Manon aria was a shade less secure. Viorica Cortez in turn appeared to be a shade tired in her aria from Il barbiere di siviglia, although ‘Amour de mes faiblesse’ from Samson et Dalila once again revealed her star potential. Sonorous although with a ‘rich vibrato,’ the bass Pompeiu Hărăşteanu excelled in a glorious ‘Ella giamai m’amo’ from Don Carlo, beautiful in tonal quality, and very expressive. Also excellent, the Brabant orchestra, although L. Sch. did not understand the selection of Mendelssohn’s overture to ‘Die Hebriden,’ and the two ‘Elegiac Melodies’ of Grieg in the program, even though they were equally well performed as the operatic ovetures. The rising feeling among those present that they were attending a true celeration of sorts was in a large part caused by the superb accompaniment that the orchestra provided the aspiring winners with.’