‘Among four tenors, three proved that it is possible to take completely different routes to the same result, failure, whereas one of the four tenors in the semi-finals proved a revelation with star potential. In about ten years, he will be a star for who the world’s leading opera houses, la Scala, The Metropolitan Opera House, Hamburg, Munich and Vienna will fight – in ten years, and if he keeps his head cool. That man is Dutch, his name: Willy Caron.’ (Leo Hanekroot in De Tijd, September 10, 1965)

Hanekroot, usually hard to please, found surprisingly many positive points in the 12TH IVC semi finals. Apart from Caron, he proved also delighted with the Dutch soprano Joke Annechien Johanna Kramer from – of all places – provincial Dutch Drenthe. He first posed the rhetorical question what good in terms of artistry could possibly come from Drenthe and the answer was: Joke Kramer. Although not yet a complete artist, Hanekroot thought that she would have been a certain great prize winner if she had waited a few years with coming to Den bosch, for she was ‘musical, showed taste, and had a voice that was well trained.’ All she needed more was experience and personal development in order to understand the personalities of Schubert’s Suleika, and that one shouldn’t sing ‘Pie Jesu’ from Fauré’s Requiem in a slow tempo because it was religious, but fast and floating because it was Fauré. Her aria from Lortzing’s Waffenschmied thereagainst, was delicious, brimming with dramatic impulse and sung in a most beautiful tone of voice, wrote Hanekroot, whose opinion was confirmed by Johan van Dongen for Eindhovens Dagblad. The latter dubbed her voice as crystalline, proved likewise impressed by her Suleika II, and predicted her a great future even though she lacked ‘temperament, a shortcoming that she shares with most Dutch sopranos.’

Hanekroot further pointed to some other peculiarities that vocal competitions can bring to the ears of critics, jury members and audiences alike, which is the element of surprise when any given singer succeeds in touching the hearts of those who listen – even if he or she still has a lot to learn:

‘An English soprano, apparently from West-Indian origins, proved most inspired and had the guts to sing Wolf’s ‘Geh, Geliebter, geh,’ from Spanishes Liederbuch. That is a song that I have never heard performed to perfection, so difficult it is.. One could actually be driven mad listening to all interpetations of it, when the min knows how it should sound against interpreters who continue to miss the point again and again. And here was this immature English soprano, technically lacking, who alone proved to have understood the song! A beginner, almost an amateur, but at times such talents can manifest themselves on a truly artistic plane.’ 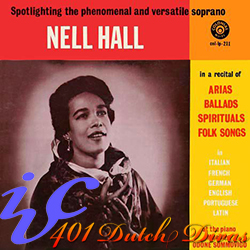 Such recollections, especially when contradicted by other critics who thought her Wolf song immature at all, makes one wish to hear this mysterious, ‘immature’ soprano that, according to Hanekroot, understood Wolf better than, say, Elisabeth Schwarzkopf… her name: Nell Hall from Barbados, who went on to record one longplay vinyl album, ‘Spotlighting the phenomenal and versatile soprano in a recital of Arias, Ballads, Spirituals and Folk Songs in Italian, French, German, English, Portugese, and Latin.’ Our friends of the much admired Vinyl Divas website dubbed this as intriguing as unfindable LP:

‘A delectable rarity of this lovely lyric soprano, who studied in New York, then toured concerts in the West Indies and South America. She is a bit oversold as ‘phenomenal’ on the cover tagline, but she is definitely very versatile.’

As for Dutch participants, Johan van Dongen also pointed to Dutch tenor Nico Boer, whose semi finals achievements weren’t worth mentioning until he stood out with a radiant rendition ‘Cäcilie’ by Richard Strauss, in which his potential was finally revealed.

For once, the 1965 critics and the Jury were in full accordance – to the point where it almost seemed that the Jury had simply copied Hanekroot’s recommendations, given the Encouragement Prize that went to Willy Caron, who would triumph in Verviers competition immediately following the IVC. In the light of this complete agreement between the habitually clashing opinions of Jury and Press, it is perhaps a good moment to reflect on the many discrepancies between them over the past ten years. We have seen years where Jury and Press alike overlooked the talents of such singers as Evelyn Lear and Michele Molese, while some agents present had no trouble spotting them; regardless the verdict, their careers still took off on the wings of their presence in the semi finals – certainly where it concerns Molese. We have seen years pas without much criticsm that brought winners that no one rembers today, such as Janka Békas and Bozena Kinasz-Micolajczak in 1964. When a record low number of participants competed in 1962, the press saw the dwindling numbers of participants reflected in the disappointing outcome, with ‘just a few basses’ and two sopranos dividing prizes that they apparently hardly deserved. Among these basses Jules Bastin and Richard Novák, in hindsight two of the major IVC discoveries.

If anything is clear from the above, it can only be that aims of the IVC organization (giving young singers a platform that also serves to promote Den Bosch as a city of culture and music) and the expectations of the press (discovering stars) were miles apart, even though producing stars certainly became a necessity in sustaining the IVC over time. Having pointed to the thin line between public relations and general aims, the fact remains that one can’t always predict the future of any given winner with mathematical precision. Willy Caron, for instance, enjoyed a brief international career indeed, after triumphing also in the 1965 Verviers Competiton. However, he would not become the singer that the world’s opera houses would fight for.’ From the 1970’s to his last performance in 2009 he would mostly enjoy a local Dutch/Belgian career.

The great paradox in this brief analysis of 11 years of discrepancies between press, Jury and IVC is that although judging individual years in the heath of the moment has proven a hazardous route for the press, many of the press’s recommendations for changes in future editions were at times right and also taken to heart by the IVC organization. We name here among others higher prize money, recruiting singers at a more advanced stage, making the competition more accessible, refreshing the Jury more frequently, and making the Jury more international