1967 PARTICIPANTS AS OF SEMI FINALS

BIOGRAPHIES OF NON WINNERS WITH CAREERS 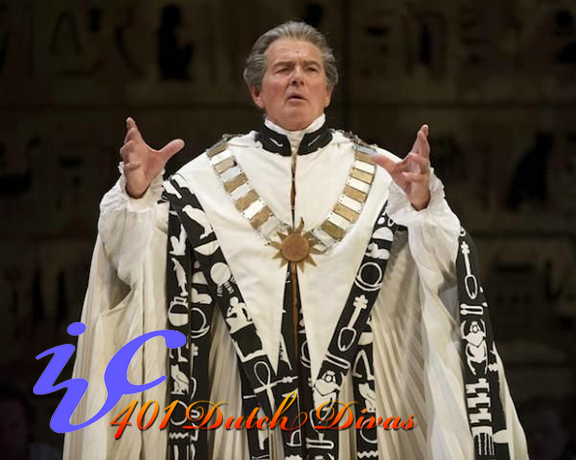 Robert Lloyd’s participation at the 1967 IVC came as a surprise to us, when researching that year, since he didn’t make it past the semi finals. Hence his name is absent from the usual lists of First and Second Prize winners. In fact, he wasn’t even considered ready for an Honorary Diploma, which means that he must have arrived to Den Bosch at a very early point in his vocal development. When looking at Lloyd’s beginnings, things begin to fall in place, since he never started out as a singer. Born in Southend-on-Sea, Essex, on March 2, 1940, Lloyd was educated at Keble College, Oxford. For a while he worked as a history teacher, and from 1963-1966 he joined the British Royal Navy, where he became a Lieutenant Instructor. It was in this period that Lloyd began to work on his voice, but only part time. His participation at the 14TH IVC therefore came before he started devoting himself entirely to his vocal studies, and with that we have here a clear case of one of those singers who use competitions as mere testing ground, or as a place to network and get some advice from colleagues, accompanists, and world famous Jury members. Time wise, it was following his passing onto the semi finals in Den Bosch that Lloyd began to seriously look into his vocal gift. From 1968 onwards, he studied at the London Opera Center with Otakar Kraus, Covent Garden's famous dramatic baritone. His stage debut was rather modest, as Minster in Beethoven’s Fidelio, with the University Opera Society London. From 1969 to 1972 he was a member of the Sadler’s Wells Opera London, and from 1970 he started singing comprimario bass parts at Covent Garden. It wasn’t long before he started singing leading roles there, and from 1972 onward, his career boomed through engagements at Summer Festivals, such as Glyndebourne (Sarastro 192-73), and Aix-en-Provence.

From 1975 onwards there are prestigious debuts in the Paris Grand Opéra, and the San Francisco Opera. In 1979 he debuted as Don Giovanni, with the Scottish National Opera Glasgow, and he also made his National Dutch Opera House debut, as Gurnemanz in Parsifal. By 1988 he conquered also the Metropolitan Opera House New York, as Don Basilio in Il barbiere di Siviglia. By that time his repertoire was established, and he was one of the world’s leading basso cantantes, celebrated in roles such as Daland in Der fliegende Holländer, Simon Boccanegra, Walter Fürts in Guillaume Tell, Arkel in Pelléas et Mélisande, Il Grande Inquisitor in Don Carlo, Claudius in Thomas’ Hamlet, König Heinrich in Lohengrin, König Marke in Tristan und Isolde, Fasolt in Rheingold, Osmin in Die Entführung aus dem Serail, Banquo in Macbeth, King Phillips in Don Carlo, Raimondo in Donizetti’s Lucia di Lammermoor, Seneca in L'Incoronazione di Poppea.

I have personally seen him in Der fliegende Holländer, with the Dutch National Opera, in 2010, a production now available on DVD from NTR/Opus Arte. Covent Garden just released their December 2013 Parsifal production onto DVD, with Lloyd now having passed on to Titurel. His trump cards have always been his remarkably solid low notes, his command, and his stage presence. In addition to his stage work, Lloyd has been much in-demand for concerts, singing and recording several oratorios with the most respected conductors of the day. His work in this field is reflected in his impressive discography of official releases.

For more detailed info, you may visit the IVC-Robert Lloyd page at 401DutchDivas.nl. 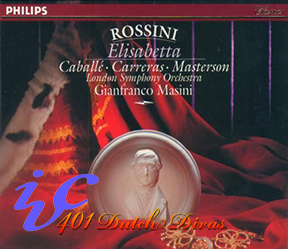 Following her IVC 1967 participation, English mezzo soprano Rosanne Creffield worked on her voice, until she was able to successfully debut with the Scottish Opera, where she sang leading roles between 1971, and 1984. We mention Olga Larina's younger daughter in Evgeni Onegin 1971, Cherubino in Marriage of Figaro 1972/73, Dorabella in Così fan tutte 1972, Hansel in Hansel and Gretel 1983, and Climene of Zacynthos in Cavalli’s Egisto 1984. Her official discography is limited to the Philip studio recording of Rossini’s Elisabetta, Regina d’Inghilterra, with Montserrat Caballé, José Carreras, and Valery Masterson (there exists a complete live recording with the same cast, from Aix-en-Provence 1975). In additon, she sings a small part in the Gala CD release of Fauré’s Penélopé. Apart from Josephine Veasey, Richard van Allen, and André Turp, this 1977 performance from Cardiff also includes 1967 IVC winner Sally Le Sage. More interesting for Creffield is the only other live recording we have of her, as Fiamina in Massenet’s Grisélidis, from Wexford 1982. 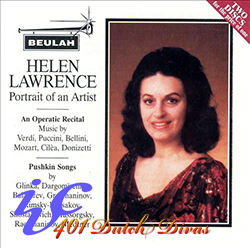 ‘Helen Lawrence must be on her way to becoming one of Britain's finest sopranos…..her voice is magnificent. Its clarity and well-controlled power enable it to float beautifully against heavy blocks of orchestral sound. She has the makings of a splendid Wagnerian’ (Manchester Evening News, reviewing Helen Lawrence rendition of Richard Strauss’ Vier Letzte Lieder, 1966)

‘Constanze is not an easy role; Helen Lawrence translated it with poise and feeling. Her handling of ‘Marten aller Arten’ one of the most elaborate and difficult of all coloratura arias, reminded us of the essentially serious nature of Constanze's music.’ (The Daily Telegraph, reviewing Lawrence’s Constanze in Die Entführung aus dem Serail, Liverpool, 1967)

Following her IVC participation in September 1967, Helen Lawrence career slowly developed into a most promising one, and by the mid 1970’s she was an up and coming opera principal. Then, she lost her voice after giving birth to her daughter. Eventually, her voice returned, but that took another nine month, during which she lost practically all of her operatic engagements. In 1979 she tried to recapture lost ground by recording a large number of her operatic repertoire, which were intended for an LP release, that had to serve as a demo for opera companies. The LP was however never realized, and it wasn’t until the CD release on Beulah label that the recordings were finally published. Rob Barnett reviewed the CD and wrote:

‘The refulgence of tone and the biting attack are quite breath taking. Her ensanguined approach in the Verdi is notable as is her well-judged pacing in ‘Vissi d'Arte.’ Nothing is rushed. She is not specially exciting in Un Ballo in Maschera or in the Donizetti but in the Mozart she is both clear and brilliant. Beauty is the watchword in the proto-Sibelian Cilea aria.’

Indeed, when listening to ‘Anch’io dischiuso’ from Verdi’s Nabucco, we can follow Barnett’s observations. Perhaps Lawrence voice wasn’t the most beautiful one in timbratura, but there’s wildness about the finale that must have been breathtaking in the theatre. While the emotional intensity of her ‘Vissi d’arte’ is nothing unusual, the rebellious accents make you realize that it here that she hedges the plan to murder her oppressor.’ Stanley Sadie, former Editor of Groves Dictionary of Music, added that the 1977 excerpts show her, ‘in full vigor as an operatic singer, and expansive soprano voice with a particularly strong and even middle register, enriched by mezzo shading.’

Soon after having recorded these arias, Lawrence voice lowered, and she found herself back as a mezzo, with a full album of soprano arias to promote herself. Her career seemed over, although she continued singing as a concert singer. The second is a recent recital made in BBC Studio 2 at Maida Vale on 17-18 May 1999, now with a theme revolving around Pushkin settings, sung in Russian. Barnett observed:

‘A splendid, almost stentorian, darkness in the Dargomizhky. The Balakirev recalls the two-piano music of Arnold Bax. In the Gretchaninov there is a brooding sombre resentment in the words and music. The Rimsky quartet of songs is typically colourful and imaginative. The Shostakovich settings alternate Guernican horror, gloom and a simplicity of passion that is very close to Tchaikovsky. […] Sing Not to Me is a miniature operatic scena typical of the composer of the little-regarded but most sweeping opera Francesca da Rimini. […] This is a winner waiting to be discovered.’

Stanley Sadie added that the second CD impressed him, ‘by the gentle shading and variety of expressive color in her voice - perhaps most of all in the Rimsky-Korsakov group, which she sings in an intimate manner and with real depth of feeling.’ BBC Music Magazine finally put one and two together into saying that, ‘Lawrence's gift for dramatic narrative sustains the gloom of Gretchaninov's 'The Prisoner' and evokes the shades of Vishnevskaya for Shostakovich's 'In the depths of the Siberian Mines'. Presentation and sound are as clear and direct as the singer's delivery throughout.’ 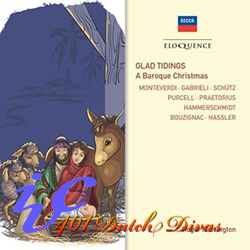 Although Johan van Dongen for Brabants Dagblad didn’t have much faith in the tenor section of the 14Th IVC, Jack Irons (1936-2005) landed a notable provincial career in the UK, and became a valued teacher. His official discography is limited to being one of the tenor voices, along with David Johnston in ‘Allelujah! Freuet euch, ihr Christen alle,’ on the Decca Christmas CD Glad Tidings, a baroque Christmas. A few rare private recordings of his voice have been preserved in the collection of his pupil, British tenor David Ashmore Turner. Iron’s recordings show him an active singer from 1956 until at least 1980, the date of his last published recording on Ashmore’s tribute page. 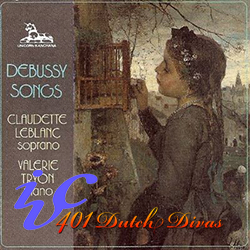 According to Leo Hanekroot, Claudette LeBlanc-Ross was not yet up to the demands of Bach’s St. Matthew’s Passion, but, ‘she captured the hearts of the audience with a glorious rendition of Mozart’s ‘An Cloë,’ followed by a brilliant execution of an aria from Menotti’s The medium, which positioned her among the favorites for the First Prize among sopranos.’ As Claudete LeBlanc, she would onwards make a name for herself as a Lieder singer, primarily in the realm of French repertoire. LeBlanc is featured on three solo recital discs. The first two appeared on the Unicorn-Kanchana label, and feature her in songs of André Caplet (1994), Debussy (1995). The third is a 1996 Hyperion release, featuring her in rarely heard, wonderful song by Charles Koechlin, rereleased on Hyperion’s budget label Helios, and available for download from the Hyperion website: 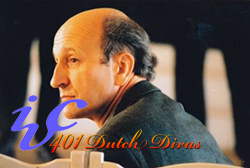 Josef Loibl is generally mentioned among the 1967 Second Prize winners, but none of the Press reviews mention him as such. He did however, have a career as a bass-baritone, although the scope of it cannot be traced anymore. There is however one recording in circulation, that gives us at least a sample of his voice.

VIDEO RIDERS TO THE SEA

Irish Mary Sheridan must have taken a liking to The Netherlands, following her later Dutch adjective ‘de Bruin,’ under which she can be traced in a few selective recordings in comprimario parts, Most notably, the 1988 film version of Ralph Vaughan Williams’ Riders to the sea, in which she play the role of the Old Woman. Thus, a tiny glimpse of her voice, and an echo of her career are preserved on the recommended DVD Kultur D439.