In his review of the IVC Gala Concert for the winners, Hein Zomerdijk agreed that the charm of the IVC and the concert was definitely to see the winners trying to prove their election to the audience, as well as trying to convince the musical world that they were the stars of the near future. According to Zomerdijk, not all succeeded in achieving the level they had reached during the competition. The concert largely belonged to the Bulgarian Valeria Popova and the American La Verne Williams.

According to Zomerdijk, the Armenian-Russian Ruzanna Lisitsian suffered from indecisiveness regarding repertoire. Although her specialty were Lieder, she was tailored to Elsa’s aria from Lohengrin, which at last minute was replaced by Mahler’s ‘Ich bin der Welt abhanden gekommen.’ Zomerdijk wrote the she made the most of it nonetheless, even though that piece also was not ideally suited for her voice. He had the same reservations against her ‘Come scoglio’ from Mozart’s Così fan tutte, which was sung with crystal clear intonation, the voice steady even in the lower range, but apparently the ‘je ne sais quoi’ was lacking. Zomerdijk: ‘Choosing the right weapon is an art in itself.’ De Jong-Stolle had less reservations and thought her ‘Come scoglio’ of great warmth and purity, whereas her Mahler piece was ‘touching.’

Apart from dubbing La Verne Williams ‘the sympathetic,’ Zomerdijk also thought that she had made an excellent choice with Puccini, Verdi and Gerschwin. Even if in mid action there might be a note or two not completely rounded, she demonstrated that a dramatic talent as hers would easily outweigh any minor technical details. Chris de Jong-Stolle thought Williams the true ‘star of the evening, a singer that would find her way to the great stages of the world.’

In terms of purity, Zomerdijk gave his vote to Valeria Popova, who had constantly improved on herself throughout the contest, and peaked during the concert. De Jong-Stolle agreed and wrote that she surprised all with a perfect performance of ‘Deh vieni non tardar’ from Mozart’s Le nozze di Figaro, in addition to which she proved well equipped for the challenging coloraturas of Gounod’s Marguerite from Faust. 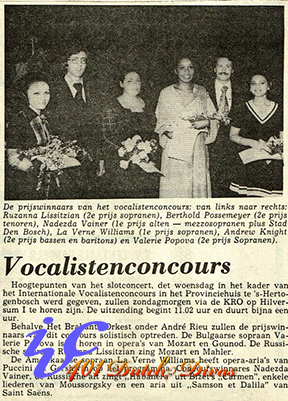 Zomerdijk also reserved glorious words for Nadezhda Vainer, who had to repeat her Carmen ‘Habanera’ (sung in Russian) under thunderous ovations, even though her interpretation had little to do with Bizet, France or Spain. Likewise, her Dalilah made Zomerdijk smile, although he respected her versatility. Her true artistry was proven in Mussorgsky’s ‘Trepak’:

‘Excellently accompanied from the piano by Olga Nikolaeva, the song did full justice to her winning the Great Prize of the City of Den Bosch.’

Most peculiarly, De Jong-Stolle wrote that Vainer confirmed his previously expressed opinion that her voice ‘lacked strength,’ which was underscored by her appearance with full orchestra. This is ‘peculiar,’ since the recording of the concert reveals a truly impressive voice. In terms of vocal dominance and opulence of voice, Vainer’s Carmen and Dalilah evoke the vocal power play of her Leningrad born compatriot Elena Obraztsova. Even more surprising is De Jong–Stolle’s comment that Vainer had difficulty to build a bridge to the audience, while she had to encore her ‘Habanera’ (which De Jong-Stolle conveniently failed to mention). To top it off, that was precisely the piece which De Jong–Stolle wrote off, saying that ‘she had no idea what Carmen was about.’ Whereas it can’t be denied that Vainer’s statuesque figure may have diminished her chances on a future stage career, the Jury’s decision t the time was always made on mere vocal grounds, and in terms of voice her election to Great Prize Winner is hardly disputable.

The two male Second Prize winners divided the critics. Zomerdijk thought that they peaked. Berthold Possemeyer was perhaps still very young, but his talent was unmistakable, whereas Andrew Knight, whose Second Prize had met with some opposition, demonstrated that his voice benefitted from the full orchestra rather than falling short. De Jong-Stolle though their appearance less successful, which is again contradicted by the recording of the concert, which shows both well up to the task, as can be heard below.

Both Zomerdijk and De Jong-Stolle complimented the Brabant Orchestra that excelled in the haphazardly organized tombola of songs and arias. This was all the more surprising given that the new location in the Great Hall of the Brabant Province House had abominable acoustics, which were apparently successfully battled with a number of acoustic enhancement objects that were stuck to the walls and the roofs. The orchestra was great in the logical showy overtures from Le nozze di Figaro and La gazza ladra. The man responsible for this orchestral brilliance was not Hein Jordans, but second time guest conductor André Rieu Sr. Zomerdijk reserved his best words for the maestro:

‘The orchestra was divine in the arias and songs of Puccini, Gounod, and Mahler, thanks to the quick silvery attentiveness of guest conductor André Rieu Sr., who felt himself like a fish in the water with all those songbirds around him.’

As a whole, the 1974 Gala Concert recording ranks among the finest in the first 25 years of the IVC, with some truly impressive, and beautiful voices, all of which can be sampled in the excerpts we provided below.

* In ‘Trepak,’ Nadezhda Vainer was accompanied from the piano by Olga Nikolaeva