1974 THE PRESS ON THE VOCAL COMPETITION 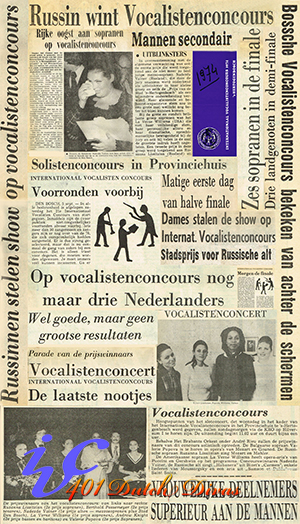 Long time IVC observer Johan van Dongen once again followed the entire proceedings of the IVC from the semi finals onwards. On September 6, he was present at the Jeroen Bosch auditorium of the Provincial Government Building Den Bosch, for the first semi finals.

Although Van Dongen proved disappointed with the general level on the first day that brought the tenors, basses/baritones and mezzo-sopranos, he made exceptions for tenors Berthold Possemeyer, and Hein Meens. The Jury agreed with him on Possemeyer, but Meens stranded in the semi finals, once more case of a Dutch artist who would continue to prove the Jury wrong by achieving an honorable career that was certainly on a par with a Second prize, or a Prize for ‘Dutch Musical Interests. Given the immediate support for him in the press, his early elimination also had little to do with form of the day or arriving one or two years early to Den Bosch, and therefore Meens further fuelled the discussions at that time, that on average, Dutch singers had more to lose than to win at the IVC.

Instead of Meens, Britisch tenor John Kingsley Smith was allowed to pass on to the finals. Van Dongen’s rejection of this English singer was not based on his technique, which he considered adequate, but the English tenor sported a prolific vibrato that disturbed the critic – a matter of taste.

Among mezzos/altos the British alto Gwynneth Griffiths and the Russian mezzo-soprano Nadezhda Vainer passed on the finals. While Vainer triumphed there, Griffiths found her Waterloo in the finals, despite her fine rendition in the semi finals of ‘Agnus Dei’ from Bach’s Hohe Messe, her impressive rendition of ‘Liber scriptus’ from Verdi’s requiem and her refined singing of Richard Strauss’ ‘Ruhe meiner Seele.’

Among baritones, the Dutch participant, Alexander Offenberg could not impress Jury or van Dongen, due to his lack of volume. According to Hein Zomerdijk his voice was promising, but he suffered form nerves. There against the Polish baritone Janusz Wolny had a voice of steel, but he lacked musicality. The atmosphere changed when British baritone Andrew Knight stepped onto the stage, who would continue to win a Second Prize. The Hungarian bass László Polgár failed to impress in Mozart’s ‘In diesen heil’gen Hallen,’ and proved inexpressive in his songs, but the Jury still let him pass to the finals, which of course was a wise decision given that Polgár would emerge from the 21st IVC as the only participant to achieve a global career of great importance, excelling, among others, in the role of Sarastro… Van Dongen acknowledged Polgár's election with a smile, saying that the Jury ‘had been so kind to let him climb the stage once more on Saturday.’ Zomerdijk did not agree with his colleague, and though Polgár’s voice resounding and enchanting; a certainty for the finals.

A myriad of sopranos

The large contingent of sopranos had Zomerdijk’s sympathies, especially the outstanding Russian Ruzanna Lisitsian, the American La Verne Williams, and the Bulgarians Valeria Popova, and Nikolina Grigorova (‘a delightful coloratura ‘sopranina’ in Bellini & Rossini). Apart from those, five more sopranos managed to distinguish themselves: the American Margaret Eaves (‘nuanced in songs by Strauss and Barber’), the Swiss Kathrin Graf (‘an accomplished Lieder singer,’ ‘The Jury made a mistake to not let her pass to the finals, since she excelled in Schubert en Debussy’), the black American soprano Janis Peri (had success with Schubert’s ‘Erlkönig,’ although she still lacked in an aria from Bach’s Mattheus Passion.’), the German Ingeborg Most (‘poetic in Mahler’), Ursula Fisher (‘gave importance to an aria from Johannes Passion’), the Dutch Anne Haenen (‘whom we would have wished a place in the finals’), the Canadian Catherine Johnson (‘sparkling in an aria from the Fairy Queen’), and the Polish Agata Mynarska (‘a great musical personality,’ ‘a wonderful piano in Moniuszko’s Halka aria’). Of them, Lisitsian, Mynarszka, Eaves, Williams, Popova, and Grigorova passed to the finals. Johan van Dongen could largely find himself in the Jury’s verdict, although he made an exception for the Swiss soprano Kathrin Graf. This soprano confirmed Van Dongen’s opinion when she achieved notable successes immediately following the IVC. Among them preserved broadcasts of Bach’s Johannes Passion from the 1974 edition of the Israel Festival, and Pamina in a 1977 Zürich Opera production of Die Zauberflöte.

Completely unnoticed at the time was the participation of UK soprano Helen Ruth Lawrence (1942), since she did not pass the preliminary rounds. This is rather surprising, given that she had been singing with success professionally since at least 1966, when the Manchester Evening News wrote of her:

‘Helen Lawrence must be on her way to becoming one of Britain's finest sopranos… her voice is magnificent. Its clarity and well-controlled power enable it to float beautifully against heavy blocks of orchestral sound. She has the makings of a splendid Wagnerian.’ 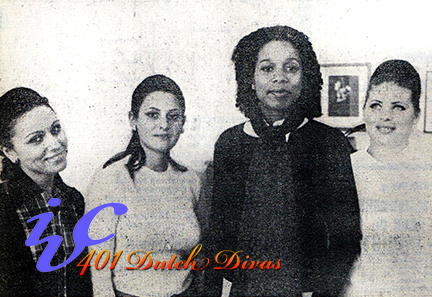 During the finals, most impressions of the semi finals were confirmed, although among sopranos the American La Verne Williams surprised by surpassing her previous performances, while the Russian Ruzanna Lisitsian, the expected winner of the Great Prize of the City of Den Bosch suffered from the speedy tempo in the accompaniment of ‘Jauchzet Gott in allen Landen’ from Bach’s ‘Catanta 51.’ Some had expected La Verne Williams to win the Great Prize of the City of Den Bosch, but the mezzo Nadezhda Vainer managed to take that Prize away from under Williams’ nose. As can be read in the intro, there was speculation about the demands of Russian Jury member Arthur Eisen, and judging on our interview with then IVC Secretary Eugène Pannebakker, these allegations had some truth to them. Regardless, it was a close call between Williams and Vainer, after the latter had truly surpassed herself during the finals. Even if Williams was the public’s favorite, Vainer’s Prize was applauded, whereas the audience in Den Bosch never hesitated to make its position clear if they truly disagreed with the Jury’s decisions.

NRC Handelsblad agreed with the Jury that the level of female finalists had been exceptionally high, and the contrast with the male section could have been even more startling, since a handful of semi finals sopranos had all it took to have been allowed to the finals as well, among them Anne Haenen and Kathrin Graf. NRC also thought that Ruzanna Lisitsian could have been given a First Prize among sopranos as well. Officially, the Jury had judged her ‘too young’ for a First Prize, but officiously she became ‘the victim’ of the Jury member Arthur Eisen’s poker play with insisting on a Russian Great Prize winner. Some had expected the audience’s favorite La Verne Williams to come out on top, although Vainer had emerged as a true challenger in the finals. However, the other Jury members only agreed if the American La Verne Williams would then be placed above the Russian Ruzanna Lisitsian. When Lisitsian subsequently shared her Second Prize with Cornelia Pop, Zomerdijk commented that this was also unfair, since Lisitsian was more advanced than the otherwise fine Bulgarian soprano… More about this close call can be read on the page dealing with their IVC Gala Concert performances. However, there was only one Great Prize to give, and in looking back we therefore ‘judge’ that such a close call merely stresses the exceptionally high level of the 1974 IVC Den Bosch with respect to the soprano contingent. To which we should add that Zomerdijk also thought that László Polgár would have been a better Second Prize winner in the bass/baritone category than Andrew Knight. Had the previous generation of critics usually been on the wrong sight of fortune telling, Zomerdijk’s ears proved mostly superior to those of the Jury.